OutThere Adventurer of the Year 2011

Are we surprised?  Yes!  What Johnny and Alan did was a FEAT, unicycling off-road across the interior of South Africa.  I mean how often does something like that happen?  To be nominated for the 'Adventurer of the Year Award' is quite an honour.  To potentially join the ranks of accomplished adventurers like Peter Van Kets (who rowed across the Atlantic Ocean twice, the first time was solo and unsupported) and Riaan Manser (who circumnavigated Africa on a bicycle) is really an honour.  These men are 'the Real McCoy'!

Super Johnny wrote a short article for OutThere Magazine (Pages 6 & 7 of the Winter Issue 2011).  You should read it.  For the touchy-feely few you can buy the magazine. 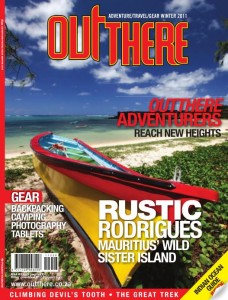 The award is announced in March 2012, it's a long wait…  But in the meantime know that the Bobs for Good Foundation are making the necessary arrangements for the CounterBalance shoe drop to happen along the Freedom Challenge Trial.  Team CounterBalance also managed to collect roughly 550 pairs of used shoes that are in the process of travelling to the old Transkei and being fitted to bare feet.