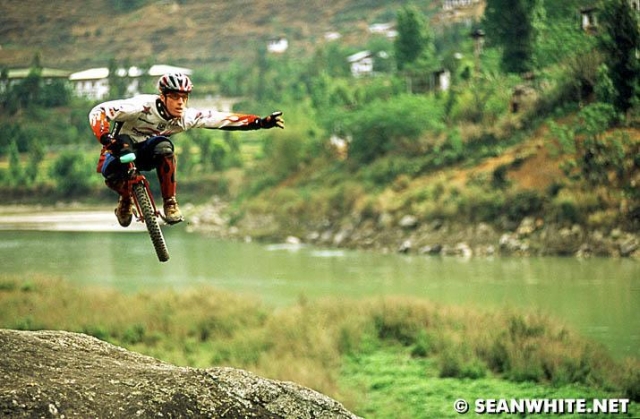 Kris Holm is one of the world’s most experienced mountain unicyclists and is the best-known unicyclist in history. Kris has ridden since 1986 and is considered one of the early mountain unicycling pioneers. He is the founder of competitive unicycle trials (unicycle obstacle riding) and was the 2005 European, 2002 World, and 1999 North American unicycle trials champion. He also held the unicycle sidehop world record from 1998-2004.

Kris has ridden technically difficult terrain in 14 countries, including the summit of the highest mountain in Central America, the summit of the 3rd highest mountain in North America, trade-routes across the Himalayan Kingdom of Bhutan, and on the Great Wall of China. In 2006, Kris climbed and attempted a unicycle descent of Licancabur, a 5950 m volcano in Bolivia. Kris was the first rider to bring mountain unicycling to a mainstream audience through film, television, and magazine features. He has appeared in over 200 international media features since 1998, including numerous television segments and 13 films that have screened at festivals in over 30 countries, including 5 films on the Banff Mountain Film Festival World Tour. This exposure has caused a major increase in the worldwide popularity of unicycling.

His film, Into the Thunder Dragon, was named "One of the Top Twenty Adventure DVD’s of All Time" in the December 2005 issue of Men’s Journal. He has also been featured in many mainstream print publications, including Sports Illustrated Adventure, Men’s Journal, Men’s Fitness, ESPN Magazine, and National Geographic Adventure.  In 2010, Kris competed against bikes in the 7-day BC Bike Race, reaching the podium on Stage 5 and placing 4th overall out of the 10 riders in the Men's Challenge Solo category.

Kris founded Kris Holm Unicycles in 1999. Originally a tiny company providing top-end unicycles to a small handful of hardcore riders, KHU now ships worldwide with a dealer network in over 15 countries. KHU was the first cycling brand to join One Percent for the Planet, donating 1% of sales to support environmental conservation.

Aside from overseeing KHU, Kris works for an engineering consulting firm as a geoscientist specializing in geohazard and risk assessment. He lives with his wife in Vancouver, Canada.