Our wonderful mascot – 'The Shunicycle' was introduced months ago to you.  He/she hasn't received proper recognition on our site.  Although when out in the field, Shunicycle brought laughter and smiles to many, many faces.  Shunicycle is an engineering masterpiece and a piece of art.

Shunicycle's creator, Julian Wills of Novatek is going to give you the low down…

When Alan mentioned that it would be great to somehow combine the Freedom Revolution Unicycle Tour and the school-shoes-for-charity theme, the compelling desire to build something entirely impractical was suddenly totally justifiable – in our minds at least.

The web has a few pictures of similar sneaker-shod unicycles, but little else. Not even a name for the contraption. Hence, the shunicycle was christened; nice to be able to participate in evolving the English language. 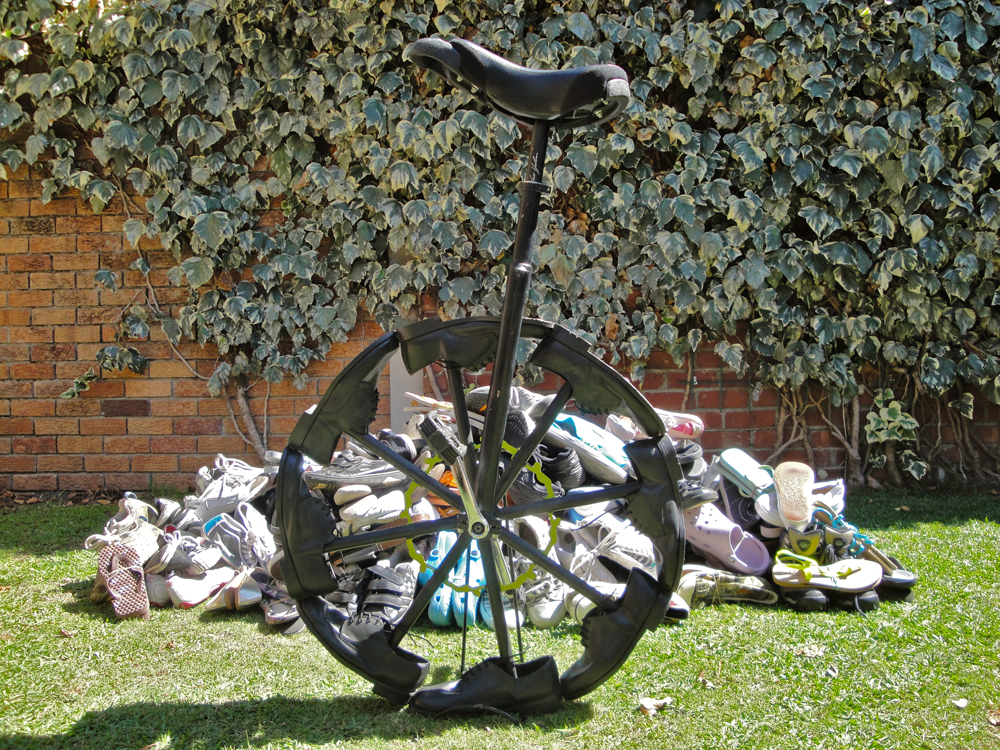 Alan sourced an old 26” Koxx frame, complete with hub, cranks and hidden cracks – it had lived life to the full. It arrived in a box together with 4 pairs of size 4 leather school shoes, with 2 weeks to get the job done and back to him before the start of the tour.

The tricky part was to fit the shoes in the frame in such a way that the whole assembly was roughly circular; shoes are actually fairly flat and need to be held in a more curved shape. Each shoe had to be angled slightly to fit between the frame arms and to look more natural (not that a shunicycle could ever look natural) with only a few mm to spare between the shoes and the frame. The layout and drawings were done using a 3d computer draughting system.

Each of the 8 shoes has a laser-cut insert onto which the shoe is attached with pop rivets; the insert was welded to a steel tube which in turn was welded to a new machined hub.

Small man-shaped figures were laser cut and added between the spokes to provide a better stress distribution – with style. It was an interesting exercise designing the shunicycle to be strong enough as cantilever beams (the spokes) are weak for their mass. Contrasting the result with a typical cycle wheel, it is a good reminder of just how effective the structural design of cycle wheels is in terms of maximising strength vs mass. 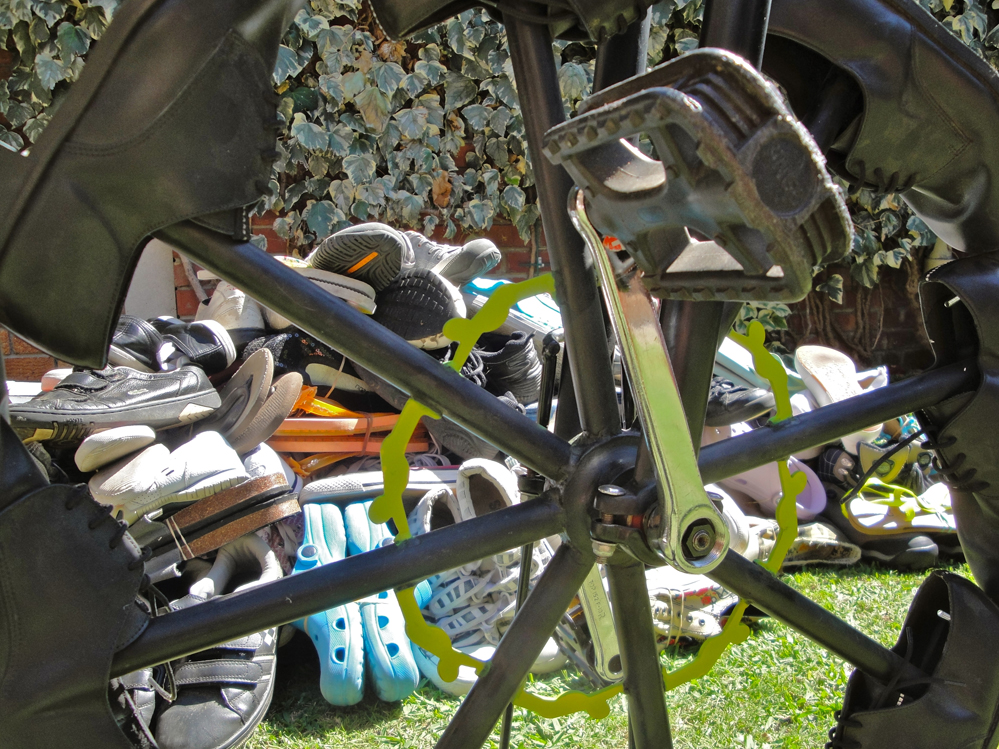 The shunicycle was painted black to match the frame and the man-shaped cutouts were painted in a fluorescent yellow – to look cool at night and to lessen the likeness to 2 superimposed swastikas. Finally, the shoes themselves were riveted to the sole plates with heels and toes touching.

The post assembly test run involved trying it out in the middle of the night with a bogroll as a seat (thank-you Alan for not sending us a proper seat); in brief, this is not a recommended arrangement.

When the shoes and frame originally arrived and we started making the Shuni, I could see that most employees thought I had lost the plot but remained very polite about it . Once it was complete and I showed them the end result, I could then see that they were no longer in any doubt. However, one has come over to the dark side and is now also a keen municylist.

In terms of ride comfort, handling, power to weight ratio, etc. the Shunicycle handles like…. well… a noisy, heavy octagon with rounded corners. But, what the heck, it is very exclusive and does attract a lot of attention. It also has some other unique features:

•  Idling is an unnecessary skill as the Shuni can be kept balanced on any of it’s 8 shoes. It is in fact easier to stay stationary than to move forwards.

•  Pumps, punctures and snakebite – forget them. Put a tin of Kiwi in your pack instead.

•  A cycle computer is unnecessary; just count the bumps – each bump is 1 foot. You also do not need to be particularly numerate as you won’t be riding very far.

•  The Shuni leaves a really mean set of tracks – like a big millipede.

•  It makes a noise. You don’t need to put a card in your spokes with a clothes peg; do kids still do that by the way?

•  You may ride it without socks.

Now, what if we tried suction cups instead of shoes?

This entry was posted by on 28/03/2011 at 14:45, and is filed under Uncategorized. Follow any responses to this post through RSS 2.0. Both comments and pings are currently closed.