« Sunday Morning Picture Update
Some Pictures For the Weekend » 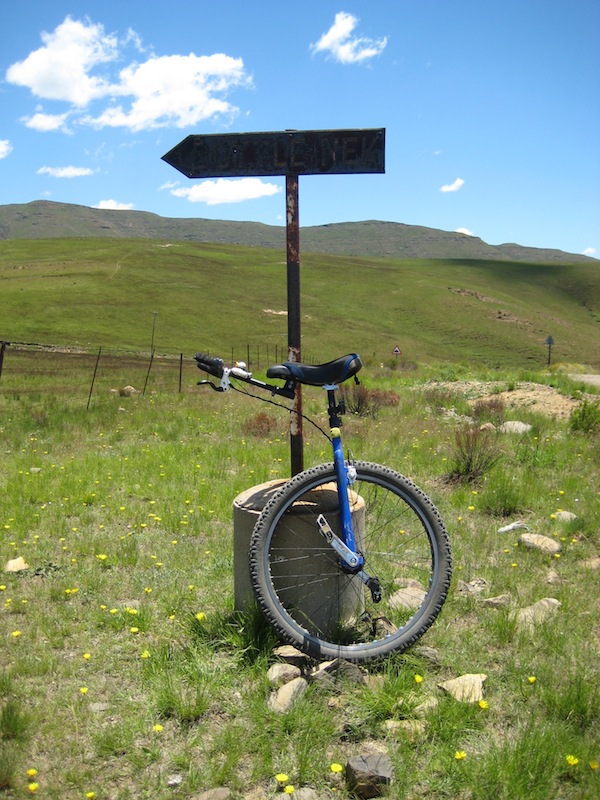 Since the last time we updated from Rhodes, our rest day, we’ve gone downhill for the most part (what with there not being an awful lot of places higher than where we were) and have been staying at a succession of farmhouses with extremely kind hosts. Sure, we’ve been made welcome in people’s houses before, and met chatty, interested caretakers (as the unicycles will always generate interest), but the past three or four days have introduced us to extremely sincere farming families. Families who live some 80 km away from their nearest big supermarkets or doctors, who buy in bulk, make their own butter and harvest their own milk. And cook delicious meals. Johnny pointed out that a likely reason for the delicious variety of food we’ve received may have something to do with there being a token vegetarian in the group, as we’ve, well, been fed a ridiculously delicious wealth of dinners, while our hosts nervously ask us if there’s enough for everyone and if the food’s okay and please have some more. To the charming credit of our hostesses, some imaginative recipes for vegetable casseroles and platters were sourced and prepared, with no need for any of the nervous presentation – we have gone to bed every night just a little too full, and wondering if we could’ve snuck more in.

So, we’ve been eating well.

Since Rhodes, everybody’s merrily told us that the road from there’d be much, much easier. In fact, on the first Thursday back on the road, the roads were so easy that Johnny and Alan arrived at our guest farmhouse, Chesney Wold, at about two in the afternoon – having easily cycled some 68 kilometers in only about seven hours.

They almost missed it, though, because the PeopleWagon was nowhere in sight.

This was because, at that exact same moment, the PeopleWagon was slowly being rocked back and forth as it was navigated around an extremely narrow path carved into the side of an undulating mountain, with a road built of loose, cragged rocks. The full scale of how out-of-place we were, was, I guess, like a hippopotamus trying to climb a spiral staircase. That narrow pass was the single most terrifying strip of road I have ever traveled on, and it is difficult for me to describe exactly how horrific it was. Donna and I found ourselves remembering what a great time we had back at Minerva when the car got stuck in the mud, in the dark. I guess being able to see the cliff you might fall off in broad daylight as opposed to an assumed sheer drop in the dark puts things into perspective. Nor am I completely sure what’s worse – being in the driver’s seat or sitting as a terrified passenger. For my part, I was the latter, and I’d attached myself to whatever holds I could latch onto like a spider-monkey, while Donna navigated the car through the debris like a champ. There was nowhere to turn around – and every time we’d appear around a bend, we’d see another ridiculous loop winding out and up, ahead – and all we could do was keep driving.

We eventually realized that a white bakkie was patiently driving behind us, and we were informed that we were driving up towards the end of the road – his farm cottage on the top of the mountain, which was definitely not Chesney Wold. Somewhere along the road, Donna and I had taken a very serious wrong turn.

It made sense, too, because none of the land-marks we described when phoning for directions seemed to resonate with anyone; see, the road we were on was narrow, over-grown with trees, and had a farm plot on both sides. There were gates we had to drive through, and a river ran on our left with a blue-green bottom – all pretty distinctive clues which people should’ve recognized instantly when we described them. Despite this, we went against our womanly intuition and ended up amongst some confused gentlemen innocently inoculating some cattle on the top of a mountain. The farmer who’d driven behind us on the way up, sent his son to guide us back down the mountain.

They way the figured, “You got up here in that thing… so, I guess you can get down, huh?”

We got down, eventually. And carefully had our map re-explained to us. And re-re-explained.

At least we managed to arrive during the daylight. 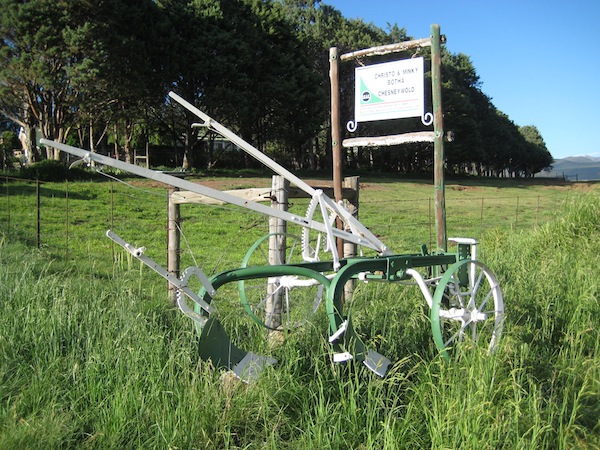 Now, Minky and Christo Botha have a remarkable house. Amongst their menagerie of pets, which include many dogs, chickens, cats, a rabbit, a parrot and a chinchilla, they also have collections of things all over their house. Toy cars. Ceramic plates. Most distinctive is Christo’s collection of caps in his bar, which he reckons numbers around 3,000. Well, about a thousand of them are in storage, he modestly admits. 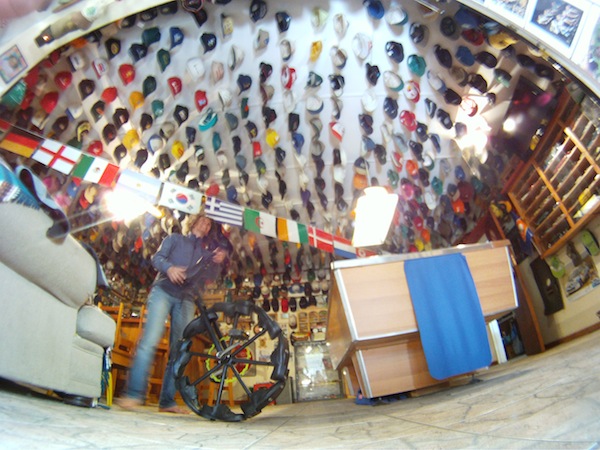 Getting to Slaapkranz, our next destination, proved to be no issue whatsoever for either the PeopleWagon or the unicyclists; it was a short road for them, as it turned out, and they covered 34 km in five hours – arriving there before us, again, because Donna and I had stopped at our first coffee shop in weeks – a cute little kitchen called Kree-ate, in Barkley East. And after that, we stopped to poke a dead squirrel in the road.

Our hosts from Slaapkranz, Andre and Joyce, were both extremely friendly and accommodating, as were their kids – when it started raining and the power went out, they made us all chocolate milk and sat with us in the kitchen while we waited for their parents to come home and fix it. Later, after dinner, Andre would affectionately compare us to farts. We thought we misheard. No, he sombrely affirmed, farts. “Just as we start geting used to you,” he explained, “you blow away!”

After Johnny and Alan delivered a routine demonstration of how to mount and ride a unicycle, and after gamely helping Andre up on the shoe-nicycle for a test ride, we four farts set out the next day towards Moordenaarspoort, a farm interesting for the fact that it’s where Jan Smuts was ambushed during the Boer War. It’s also deliciously spooky for the fact that Moordenaarspoort translates into “muderer’s port” in English.

I mentioned that while we were in Slaapkranz it had started raining, right? This was a subtle yet important detail to remember. For, you see, the dirt roads we were driving on undergo a transformation when met with water, and become mud roads.

The first time Donna and I got stuck, we proceeded to remedy the situation in a business-like manner:  we collected grass from the side of the roads and lined the wheels to provide traction. Then it started raining again. Donna chased me back into the PeopleWagon, as I lacked water-proof gear, while she continued to line the road with grass. When it started raining even harder, she returned to the car, and we resolved to sit and out-stare the rain until it let up and, I don’t know, dried the roads a bit more.

Well, it did stop raining, and the puddles around us shrank a little, and the grass mats we’d laid out must’ve helped, because, sliding only a little, we scaled our frightening hill and carried on. Until we got stuck in the mud again, on the side of the road. In a little ditch. Particularly, the back wheel on the right. Again, Donna and I sprang into action in a mechanical fashion, busily piling grass around the wheels.

Shortly afterwards, Johnny and Alan arrived at the scene, puffing and panting through the mud themselves, and automatically started pitching in to help – probably a little grateful to take a break from pedaling through the mud.

Despite our sincere intentions, the traction didn’t help so much, and the wheels still spun in one place, even after we tried pushing.

We gave up for a while. Johnny dug a paraffin lamp out from the PeopleWagon, found some mugs, sourced some tea, and boiled water. We snacked on our sandwiches we’d made for ourselves that morning, and rooted around for chocolate bars. We put some music on.

Eventually a red bakkie trundled past us, skidding and sliding expertly, and stopped at the top of the hill we were stuck on. Two farmhands climbed out and walked out towards us, enthusiastically clapping their hands and whistling. Through their guidance, we eventually eased the PeopleWagon out of its muddy little pit by rolling it backwards, while the rest of us pushed it from the front. We eventually got it on top of the hill, on flat ground, in more or less the same way – with a whole lot of us giving it a helping push. 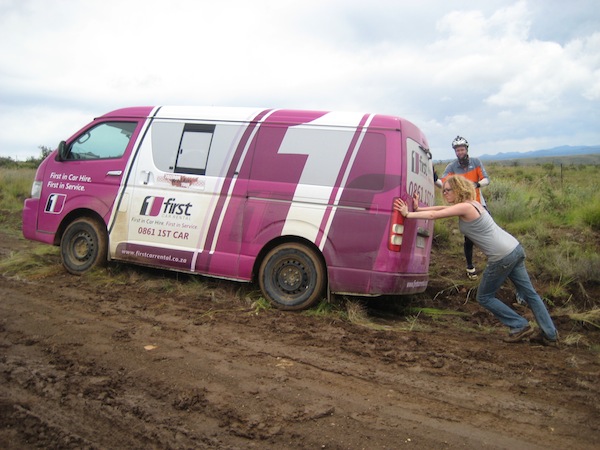 From that point onwards, the road improved drastically. Moisture-wise, at least. First Car Rental’s little purple beast has done a great job, considering the terrain we’ve forced it on. We feel like we can hear it wracking huge sobs of relief to itself every time we get back on tar.

Today is Day 16, and we are pretty much in the Eastern Cape, alright. The green mountains and floodplains hidden amongst the winding hills and mountains have given way to open, yellow plains with dry succulents and red earth opening up to receive us. The land is thankfully flattening out and the roads are (“they” say) getting better and better from here. I’m not counting chickens yet – we still have a Karoo desert to cross.

I mentioned last time that Johnny’s father, Neil Cronje, has been involved in a very bad hit-and-run accident. For the past few days Neil has been in a critical condition which has obviously left Johnny in a very difficult place – to date, Neil is stable, and Johnny is still cycling.

We at CounterBalance send Neil and the Cronje family our sincerest regards and thoughts – we’re thinking of you guys.

So, we say this a lot, I know, but CounterBalance still really, really needs to raise funds for our shoe mission – we need funds to raise 2,000 pairs of shoes for Bob’s For Good. We’re doing crazy things for this. We’re getting lost. And stuck. And, oh, some people in this party are trying to ride back to Cape Town on one wheel. Off-road.

We really, really appreciate the support and commentary you’ve given us so far. Thank you for checking back as often as you do, and for everyone who’s spread the word. But we really need to raise money from donations to make this all worthwhile. Please consider helping us out with a donation – every bit helps, and we’re doing it for a humble cause.

We're also selling advertising space on the site. Guys, we get more and more web traffic every day, thanks to you – please email me at thebestkirby@gmail.com for more details if you're interested, or know someone who is. 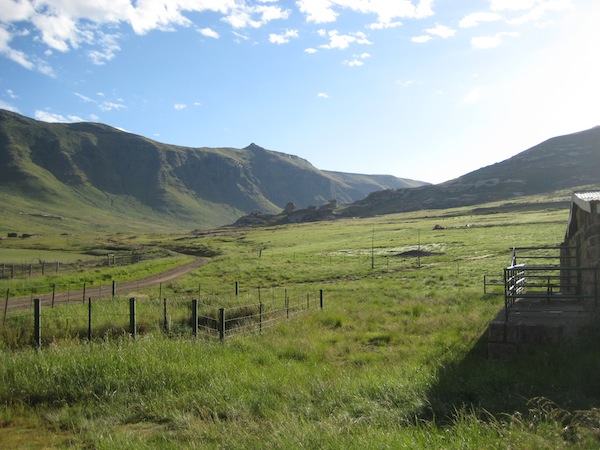 This entry was posted by on 13/12/2010 at 12:40, and is filed under Uncategorized. Follow any responses to this post through RSS 2.0. Both comments and pings are currently closed.