« The Freedom Revolution Tour
Day 3: How’s YOUR Monday been? »

Team CounterBalance is ON THE WAY!

We are in Durban! Team CounterBalance is unicylcing! I'm blogging!
We set three crazy unicyclists adrift – sorry, on their way, at the cheeky hour of 4:00 AM. We all got up at 2:30 AM to pack the PeopleWagon and get to Blue Lagoon from Geoff Brink's house, our awesome handle-bar-moustached  host for the past two days. Jamie Falconer of redsockfriday even came to see us off!
Today, they will cycle some 70 km and stop in Umgeni Valley, and we'll spend the night at Indigo Skate Camp, courtesy of Dallas Oberholzer. Forecasts include unicycles on half-pipes, and tears.

So, this is it. These guys are on their way and are now in motion to move through 2,500 km of rural South Africa to go back home.

It took us two days in the Purple PeopleWagon to cover a distance that will take the CounterBalance Team 44 days to get back to where we started. Mind-blowing, isn't it?

So we realize we've been pretty quiet on the update-side of things over the past day, considering the excitement, huh? We do apologize – we've been cut off from all cellular reception due to a Network area. So, this is something that, unfortunately, might kind of happen again, a couple of times. We're going pretty rural, man. Some places just won't let us inter-web. So check back often – when we've got the chance and means, we'll be blogging like maniacs (well, I will); otherwise, we're not being scarce because we're lazy or don't like you. We're just too integrated into technology, provided it WORKS.

Check back often. Where we can't blog, we'll Tweet. And that will show up on this page.

So hey, how's your week been?

We left Cape Town (pretty) early on Wednesday and ended up in Jeffrey's Bay, where we spent a night in Jeffrey's Bay Backpackers, in Jeffrey Road. Bonus points for triple Jeffreys!
We kind of realized that the bulk of our trip would be the next stretch to Durban. See, Cape Town to J-bay was about a nine-hour trip to cover 700 km. Jeffery's Bay to Durban was around a 1000 km, and we arrived at 11:43 on Thursday evening. Which almost made it Friday. 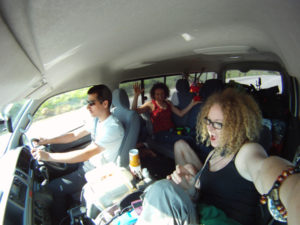 We actually met Brad, our guy from Magilight, who kindly treated us all to a lighting-fast breakfast coffee in Port Elizabeth. Heck of a cool guy, and his bike lights are magic!
In between that, we photo-bombed Grahamstown with First Car Rental's Purple PeopleWagon, Johnny bought a can of pressurized icing sugar in East London, and we drove through an intense lighting storm between Kokstad and Durban.
Throughout, we drank many, many cans of Bos Ice Tea and probably consumed our own weight in pecan nuts. Johnny consumed an entire can of pressurized green icing sugar. Still waiting for updates on how that decision's working out for him. 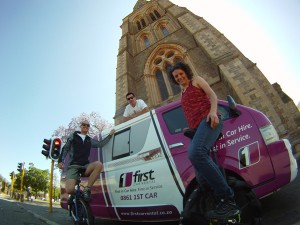 We've been staying with the massively entertaining and affable Geoff Brink and his wife Kim, who fed us, washed us, drew maps for us, and followed us on Twitter literally an hour after she promised she would (are YOU?)

Geoff is actually the first guy to have unicycled from Durban to Cape Town – followed by our Fred Hatman as the support driver. Geoff is kind of a crazy guy for doing what he did, because he embarked on this tour about three months after actually learning to ride a unicycle! Team CounterBalance, on the other hand, are going to be the first guys (and girl) to unicycle from Durban to Cape Town, off-road. Nevertheless, Geoff has been an inspiration and valuable source of advice on the no-mean-feat matter of propelling oneself across the country on one wheel.

So Alan, Donna and Johnny. Man. For the next seven days, these guys will be unicycling the Sisonke region (all off-road, remember), all the way through the Maluti region, where they'll get to Rhodes by December 8 – and have a rest. Check out the itinerary to see what these guys have in store for them – it's a heavy push.

So, wow.
We're here.
These guys are really going to do it.

They're really going to unicycle from Durban to Cape Town.

Wish these guys luck. They're taking on something huge.

And it's going to be awesome.

This entry was posted by on 27/11/2010 at 05:54, and is filed under Uncategorized. Follow any responses to this post through RSS 2.0. Both comments and pings are currently closed.