« 8 Days Away!
Interview at Tulbagh, where we melted into the furniture. » We have, at length, arrived in Anysberg Nature Reserve, after spending Old Year’s Eve at Rouxpos farm. Well, we bravely managed to stay up until around 9 before we excused ourselves and went to bed. So, thanks everyone else who stayed up and made sure the New Year turned up as it should’ve! Because if it were left up to us, we probably would’ve just woken up at 4:00AM to find 2011 and everything else, broken.

Well, what we’ve done with our New Year’s day instead is to execute damage-control. For the first time in a couple of days, Donna and I arrived at our rest point before Johnny and Alan, which was an immediate cause for concern – we’d arrived after two in the afternoon, a time of day where we’ve grown accustomed to finding Johnny and Alan lounging around scruffy and shirtless and listless, like feral cats. So, when we arrived at our, ah, rustic lodgings at Anyseberg Nature Reserve, we were lightly concerned at the absence of two yowling unicyclists.

I should backtrack and detail that it had unexpectedly rained heavily as we turned onto the dirt road towards the reserve (as seems to happen whenever we enter an area which boasts a dry, arid climate), and the effect was that the roads turned into little rivers. I ploughed through puddles swelling into rapids, as Donna inconspicuously clipped in her seatbelt and stared out the window, contentedly pretending she was somewhere else. So, we realized that there might’ve been some relevant reason for Johnny and Alan being delayed somewhat. We’ve also had no cell phone reception since we left Oudshoorn (where Donna and I were really puzzled as to why everything seemed to be closed at one in the afternoon, before we realized it was the 31st of December), so calling them to check up wasn’t even possible.

Donna and I had also been slightly delayed in leaving for the day, because we’ve been playing at being cartographic detectives. See, we’ve come as far as we are with around seventy A-4 contour-maps of South Africa, which compliment a series of instructional narratives supplied by the Freedom Challenge, and combined, these sources (sometimes) leads the user through the correct, established off-road route. Thing is, as of tomorrow, we’re kind of on our own. We’re veering off from the Freedom Challenge route and staying in different places in and around Matroosberg, Witsenberg, Tulbagh, Perdeberga and Blaauwberg, before hitting up Mouille Point this Saturday (by the way, you’re invited – we’ll be there at 12:00).

Okay, now, those places I just rattled off up there? Is as much as I or any of us know about where we’re traveling to or staying. I don’t know how far apart they are, or how to get there, or where in Matroosberg we’re supposed to go, because we don’t have maps or narratives for them yet. Well, we have these two screen caps of GoogleEarth images that have helpfully been emailed to us. Have you ever gone into one of those old garage bathrooms where you have to pay R2 to get in and then there’s a cleaning lady who hands you exactly three carefully-counted squares of toilet-paper?

What we do have, though, are a couple of DVDs with official raster maps of South Africa’s Chief Directorate’s National Geo-Spatial Information, which is a fancy way of saying we have a bunch of maps on discs. Unfortunately they are huge image files, and having Johnny and Alan unicycle about with a laptop dangling from one of their necks doesn’t seem to be an option, so Donna and I have had to extricate which of the 20 bazillion maps on these discs are relevant to our supposed routes, separate them into printable A-4 pages, and print them. I might add that we were sitting in Gerard and Ronel Roux’s living-room the entire time, who kindly let us use their printer and dining-room table as our geo-spatial base of operations while they cleaned and pottered around us.

After an exhaustive and frustrating morning’s work, we managed to leave at  one o’clock in the afternoon with enough map coverage for… the next day’s navigation. Seriously, a full day ahead of the eight days we have left. We didn’t have the strength for any more after that. I mean, we’ll get to it. Once we figure out, you know, where it is that we’re meant to be headed, anyway.

Anyway, in the comfort of our new lodgings, Donna and I pulled out some chairs and sat on the porch until around 5:30 to drink coffee and tea and stare at some antelope grazing against the mountain backdrop, and started drawing ultimatums; if Johnny and Alan hadn’t arrived by 6, we’d have to start driving to rescue them. The rain had stopped, but the roads were still likely to have aspirations of rampaging rivers, and we didn’t want to get the PeopleWagon stuck in the dark again. We’ve already had a PeopleWagon slumber party. We’re over that, now.

Happily, Johnny and Alan arrived just as we were contemplating whether to begin our search party or get a second cup of coffee. I say “happily” for Donna and I, because it meant we didn’t have to drive anywhere and we could continue comfortable sitting where we were, because the truth is, Johnny and Alan didn’t look too happy at all. They’d covered 85 km, and had been riding since 5 in the morning – a long, 12-hour day. They’d been caught in the rain, of course, and had been significantly more intimate with the upstream journey on the road-cum-river. They’d also somehow been separated when Alan stopped to tie his shoelaces, and spent a considerable amount of time furiously cycling through a valley, trying to re-locate each other by blowing on their emergency whistles – which was made a difficult task from the valley’s echo. This resulted in the two of them riding in exactly the opposite direction whenever one of them heard the other across the valley; their eventual reunion is something that probably happened in a slow-motion unicycle collision across a grassy daisy meadow.

It would’ve been full of acacias, really.

To top all that off, Johnny had a fall today. The unicyclists describe two kinds of ways to fall of one’s unicycle; there is the common UPD, the “un-planned dismount”, which happens when you neatly land on two feet after encountering a speed wobble or a bump; the second, is the classic “bail”, and is a typically untidy and ungainly dismount from the unicycle in which several or more parts of the anatomy delicately drag themselves across the earth against the grain of your own skin from the momentum of being propelled through the air, at the ground. Johnny bailed. In doing so, hurt his arm enough for him to lie very still for a couple of minutes, which forcibly triggered Alan’s first-aid response. Johnny recounts the swift sequence of events as a twofold execution of 1) the immediate production of a camera and 2) offering Johnny a Bar-One.

From the looks of things, everybody is otherwise doing well. Meeting each other at the end of the day has been a consistent reassurance for everyone throughout the tour; we’re happy to see the unicyclists in one piece at the end of the day, and the unicyclists are delighted when they recognize the Purple PeopleWagon and make a beeline for the red cooler-box with Stoney Ginger Beer and Crème Soda, Alan and Johnny’s respective carbonated drugs of choice.

So, hey, we are a week away from home! That is a crazy, crazy thought. We’ve spent 35 days on the road, and have slept in a different bed every night. We’ve made new friends, taken our PeopleWagon where no Toyota Quantum has ever gone before, and seen some of the strangest, most wonderful hidden gems of rural South Africa.

We’re not done yet, though. Close. So close!

Updated Travel Summary (we had some gremlins in the system. By "some gremlins" I mean "I made a blunder"): 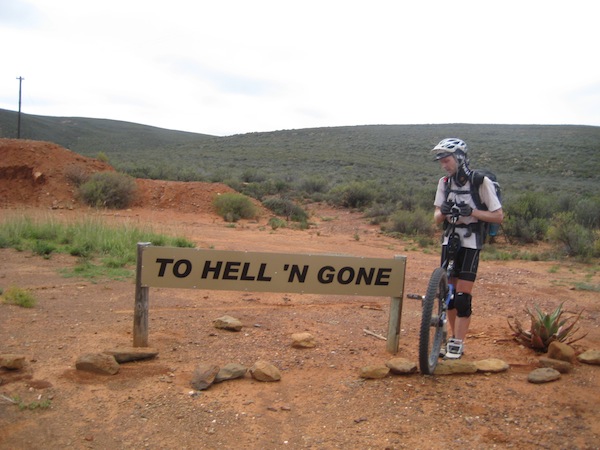 Don’t forget why we’re doing this, though – not because we’re terribly bored individuals who hate being around people during the holidays who maintain no other social commitments, or anything. Honest. We’re doing this to raise money for Bob’s For Good – our goal is to raise enough money from donations for 2,000 pairs of shoes. And, I dunno, I guess this seems like a good way to draw attention to it.

So what’re you doing for the weekend? I mentioned that you’re all invited to meet and greet us when we arrive a Mouille Point at 12:00 this Saturday, right? We’re easy to recognize. I’m the broad in the purple wagon, Johnny, Alan and Donna are guys on the sawed-off bicycles. Easy.

So, see you there, then! 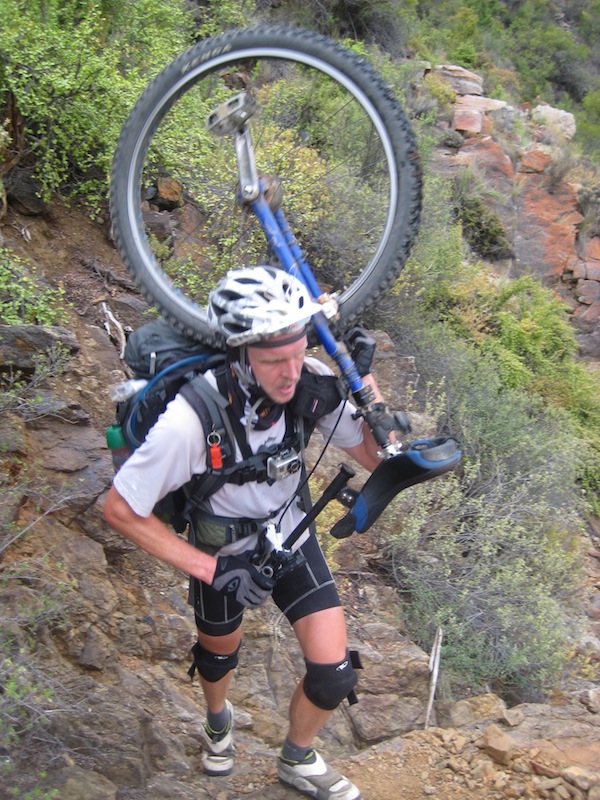 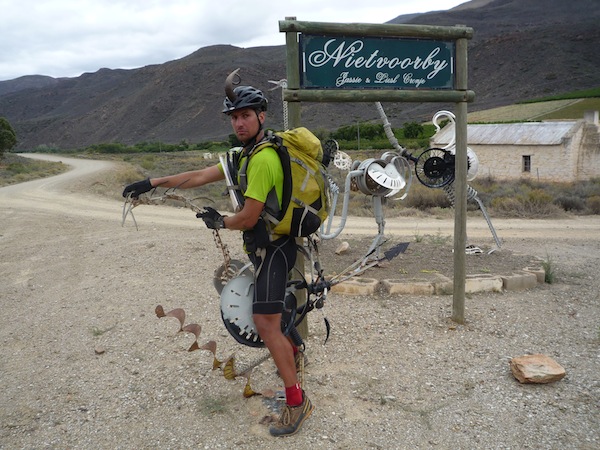 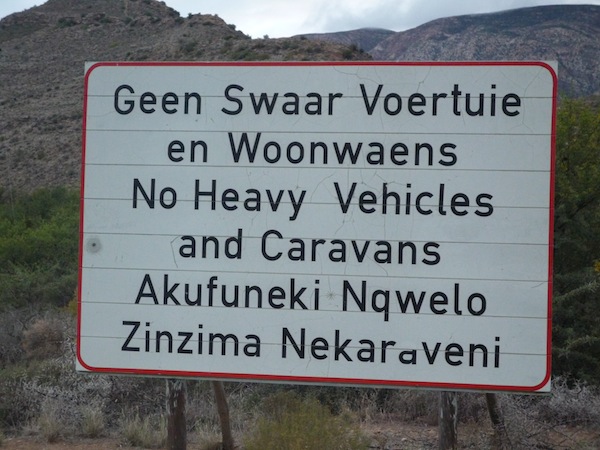 This entry was posted by on 02/01/2011 at 14:12, and is filed under Uncategorized. Follow any responses to this post through RSS 2.0. Both comments and pings are currently closed.