« Like David said: “Not only is it a journey across the country, but a journey into the soul”
Who is Raul? I am Raul. »

The PeopleWagon rumbled up to the farmhouse and the engine sighed as I turned off the ignition and climbed out, coughing in the settling cloud of dust. Three awkward ostriches scattered out of the way, tripping over each other, rubber necks swaying, serpentine. Wiping his hands on his shorts, the farmer extended one hand in a handshake and jerked a thumb at the house behind him. 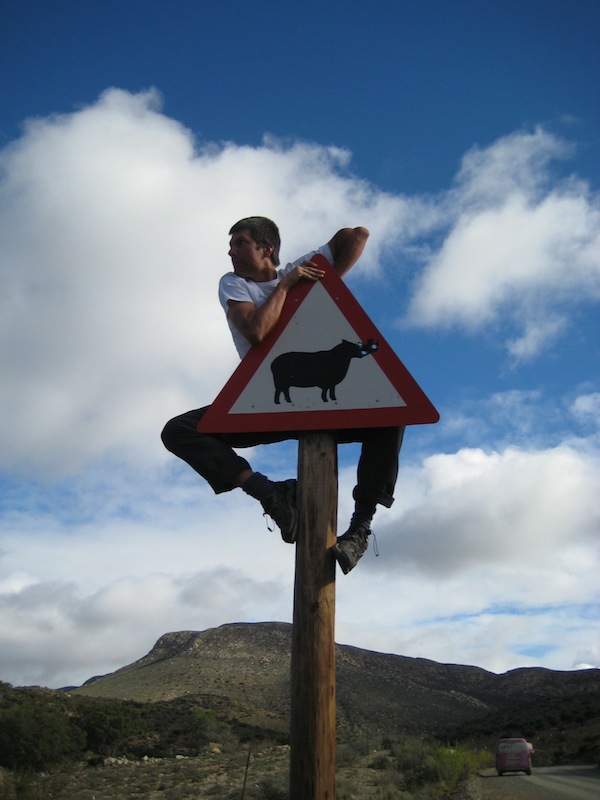 “They’re in there,” he said sheepishly. “We looked for you, but I guess you found us.”

“Thank you so much, sorry for the confusion,” I replied.

“THERE you are!” Johnny and Alan appeared, grumbling, at the doorway as chickens and small children scattered underfoot.

“Today, has been a bad day,” Johnny muttered.

“I hear that,” I said, scooting crates and bags in the PeopleWagon to make room for the two unicycles and riders.

“Got caught in the rain, did you?” the farmer asks, eyeing my trousers, soaked up to the knee.

“Thank you for the coffee! And the bananas! And the rusks!” Johnny calls out, climbing into the PeopleWagon in order to tactfully avoid further small-talk-induced delays. I’m left to stammer an apology and thank them for finding Johnny and Alan and keeping them till I’d found them.

Oh, see, the events that led up to us all meeting up last Tuesday evening, December 21, involved both driving and unicycling parties having spectacularly terrible days. We left our chintzy game lodge rooms in Kleinpoort early in the morning – I, to drive to Uitenhage to pick up some pre-Christmas supplies, Johnny and Alan, to do their regular one-wheeled thing. About twenty minutes after we’d left, Alan phoned me to ask me to get tire slime – he’d all but destroyed his wheel at the hands of a malevolent acacia thorn. It was a hot day, for the most part. Until the skies opened up and barfed rain all over what all the maps told us was a “dry, arid land”. By this time I’d returned from my 200km-there-and-back journey into the Urban Pre-Christmas Wonderland, and was on my way towards the farm we were supposed to be staying at for the night. It was here that rain suddenly pelted the earth with the fattest droplets I’d ever seen, at a sharp 35°angle for maximum range and efficiency.

This is the weirdest rainstorm I’ve ever been in there. The skies suddenly frowned, dark clouds spread like an angry man going red in the face (except, black in this case), and the faucet opened up. I should back-track a little and mention that I’d made things a little difficult for myself because I called the farm while I was still in Kleinpoort and asked for directions how to drive there. The guy on the other side of the line sounded very confused but stoically gave me directions, landmarks and distances, and then asked me what the deal was.

“The cyclists!” I wavered.

“So, what, you guys want to camp here or something?”

It turned out that this guy pretty much didn’t know anything about two unicyclists and a PeopleWagon driver wanting food and bedding at his place for the evening, at all, and was on his way to becoming very angry at my cheek. So I called our booker, Meryl, who up to this point had done an excellent job of our bookings – every place we’ve been to has served us vegetarian options. Now, really, what I should have done was hang around the sandwich shop in Kleinpoort like an obedient problem-solver and waited for Meryl to call me back. Instead, I got in the PeopleWagon and started driving according to the directions the previously kindly old man had made me repeat to him.

Now, apart from getting stuck in a storm, the road also afforded no cellphone reception.

The storm, as it turned out, only lasted a solid ten minutes before the skies drained themselves out. I continued driving until I arrived at what appeared to be a raging river coursing over the road I was supposed to be driving. On the other side, a farmer had parked his bakkie at the river bank and was glumly staring at the water.

I hopped out and stood at the edge of the bank.

“Is there another way to the other side?” I called out.

“Naaah… I think the best is just to wait,” came the reply.

So we waited. The farmer got fed up, climbed in his bakkie, and drove away. He left some hands of his to continue glumly staring at the river, presumably until it ran out. In the meantime, I got fed up of waiting, took of my shoes, and decided to wade.

The current wasn’t so bad, and beneath the water, the road was okay. So I got in the PeopleWagon, and drove it through the river.

On the other side, one of the farmhands stopped me.

“If you see the old man again, tell him it’s okay to cross, the little girl made it through”, he said, grinning.

When I was about ten kilometers away from the farm I’d planned to go and make a scene at, my phone suddenly picked up a message Meryl had left me – she’d found us alternative accommodation, and knowing that there didn’t seem to be any cellphone reception, had sent out a couple of nearby farmers to drive around and look for us.

Ohboy. I didn’t know where to start with this information. Do you know how much Karoo is out there? Loads. And the riders were somewhere in it.

Thanks to some sensibility I decided to turn into a farm I’d passed, which was a landmark on our route maps. When I got the gate, I realized there was woman in a car behind me. I hopped out and started trying to figure out how to say that I was looking for my lost unicylist friends, had the lady maybe seen them, before she cut me off and said “Yes, they’re inside. We’ve been looking for you.” 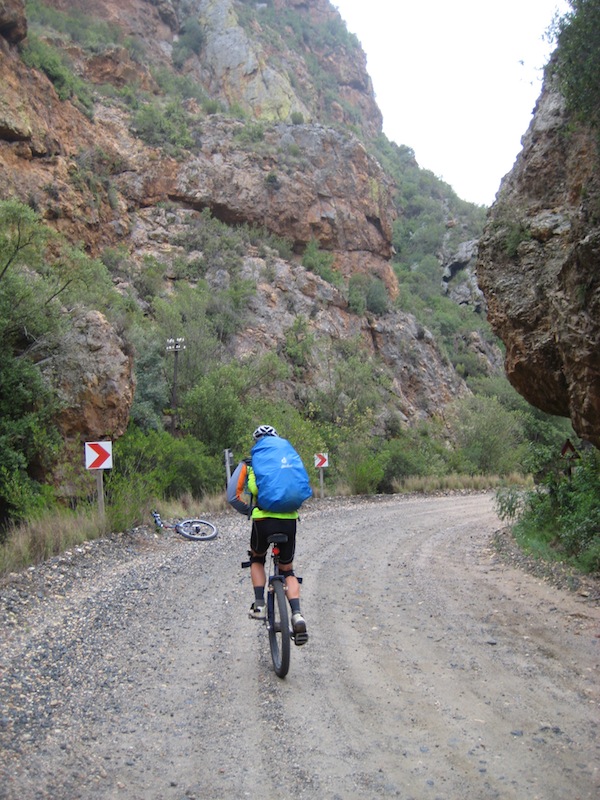 Johnny and Alan had had a tiring and confusing day. The terrain, they said, was the toughest they’d encountered yet. And there were acacia thorns everywhere. They were exhausted, and hot, and soaked, in pretty sour moods, the both of them.

I’m not really sure how our logistics crossed wires managed to uncross themselves and bring us together again, but, well, they did. We were taken in and housed by a very friendly and helpful couple who happened to own a Karoo health spa guesthouse about 20km away from where we were, and set us up in it, food and all.

The flip-side of this nice deal, however, was that I had to drop Johnny and Alan off at the farm we were supposed to have stayed at, early in the morning. Freedom Challenge route rules, you know. As it turns out, this was a lucky chore, because another farmer saw us on our way and warned me to, under no circumstances, attempt to drive through the beginnings of the Baviaans Kloof mountain range in front of Johnny and Alan with the car I was in. It’d be better to take the tar road around the mountains, through Uitenhage, and up through Hankey and Patensie. The guy had me at “tar road”, so I re-routed my plan and drove back to Kleinpoort. I’d planned to refuel, too, and serendipitously discovered an extremely flat tire as I stopped the car.

Possibly the sight of a cursing blonde lying on her back under a purple van for no apparent reason draws attention, because a car pulled up and two guys jumped out, asking if I was trying to change a tire or something. So, I played the Girl Card and politely accepted their help in changing the flat.

Despite having about a 400km drive to our lodge in Cambria, at the Gates of the Baviaans mountain pass, which would later be the source of a five-hour white-knuckled drive over 80km of hobbled, narrow mountain passes, we were in much better moods after this. Johnny and Alan are positively flying their routes lately, and apart from a little bit of waist-high wading through water here and there, or Alan receiving temporary muscle paralysis from acacia thorns, they are doing a-okay.

Our Christmas was spent in a cave! Really, it was neat. Our place was a literal cave which had a very simple wooden roof and wall built over it to make it a dome, with a couple of bunk-beds, a table, and a gas stove. The unicyclists arrived at the location before 12 in the afternoon, so we decided to drive another 50km to the nearest town, Willowmore, to make a few Merry-Christmas phonecalls, buy some things, and get some lunch. We’d all exchanged gifts in the morning (by some chance we all bought each other a jar of Nutella), and bought some Ouma rusks and marshmallows to go with it for our braai that evening. Actually, in all honesty, none of us were excited about braaing. It just seemed like work. We made a fire, roasted marshmallows, made Alan cook the meat that had been left out for us so he could feed Johnny and himself, and we ate the pre-prepared potato salad.

Our appetites had been sufficiently spoiled by eating Nutella and sweets anyway.

Today we’re headed for another farm stay outside Willomore before we hit Prince Albert the next day, and we’ll also have our last rest day before we trek the rest of the Western Cape, back home. Donna’s joining us again tomorrow – and she’ll be back with a vengeance – she’s planning to ride with Johnny and Alan!

What did you guys do for Christmas? Was it awesome? Ours was. We were in a cave. 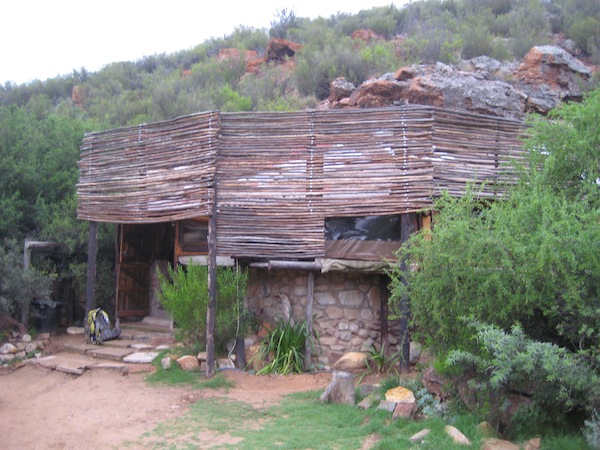 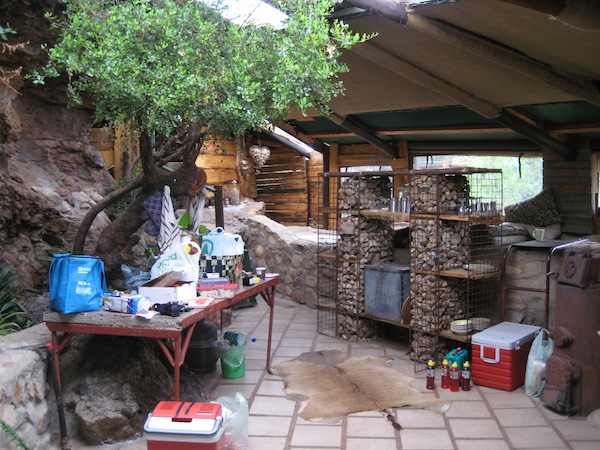 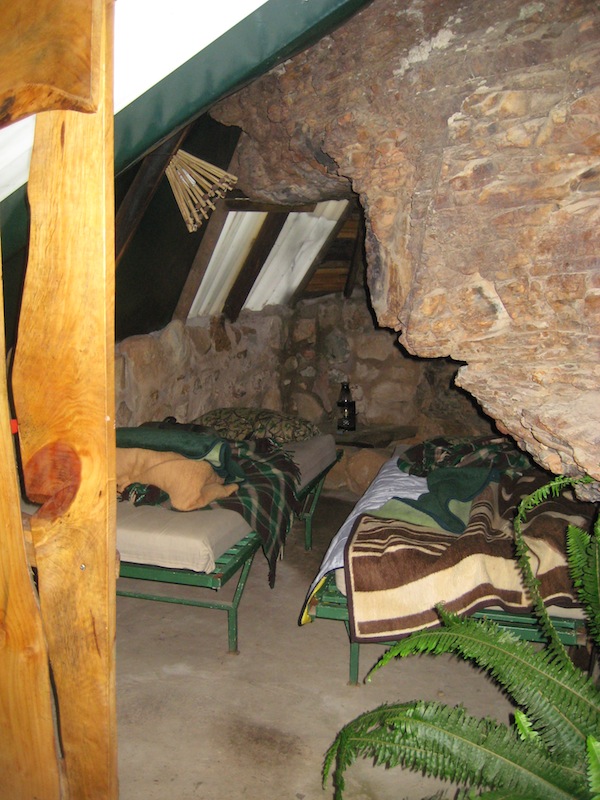 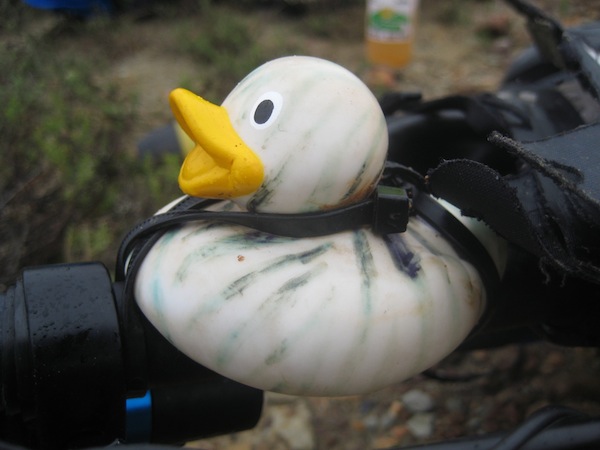 This entry was posted by on 27/12/2010 at 12:13, and is filed under Uncategorized. Follow any responses to this post through RSS 2.0. Both comments and pings are currently closed.