Greetings, readers. The words that grace your screen were not typed by the fingers of that blonde hooligan, nor by any of those maniac one-wheelers. No, this has been generated, painstakingly, but deliberately, buy none other than I: Raul.

Raul the Magnificent. Raul, the Mighty.

Why do you stare so blankly ahead? You’ve read of my suffrage. Of my undignified manipulation through murderous lands and terrain. Landscapes and relics of the geography still line my flanks; were it not for rain, I would never be washed. My pores are like the potholes I am forced to plough through, and mud has cemented itself so solidly beneath me that I fear the necessity of pneumatic drills to remove it and restore me to my formal luster and sheen.

Why am I still a stranger to you? For fifteen days you have followed my chronicles! You and I should be as old friends by now!

Unless I am only memorable to you as referenced by my stupid sobriquet, courtesy of that lummox land-pilot, and I am loathed to respond to it.

Why are you so surprised that the PeopleWagon should learn to type and post things on the internet? And why must Raul the Majestic be subject to clinging onto a made-up, milksop moniker to make himself known to his friends?

But I can only dribble industrial fluids if my seals are not clamped on firmly.

That I could manipulate the alphabet on a keyboard of a human computer with my wheels, caked in mud and whatever detritus I am forced to drive through (I shudder to think what else lines the crevices of my tires), is testament to my genius and multitude of talents.

As an individual, I am driven. Literally and metaphorically, for I reveal that I have a dream: to drive (literally) off into the sunset, with somebody who truly understands and respects the needs and skills of this purple beast of many talents at my mighty helm and command. A pilot who’d never be faulted for missing a signpost in the Eastern Cape and finding themselves commanding me around the precarious perches of a narrow road, snaking around the cliff of a mountain, on loose gravel concrete footing unfit for anything other than, say, a military vehicle or helicopter, perhaps. Nor would my dream pilot bequeath me a journey in a soupy road and see me spin my tires in the muck like a helpless tortoise, and have to resort to harvesting wet grass from the sides of the road to generate some pathetic substitute for traction on an otherwise wholly unsuitable road. As if these buffoons assume I am as adept to the terrain as a suitable aquatic African water-dwelling quadruped would be.

Which I am not.

No, my pilot would not force me to groan and labour near-vertical ascents, nor suffer me the indignity of the cultural humiliation of an established, well-to-do urbanite such as I to traipse lands which yield nothing as simple as cellular communication reception. 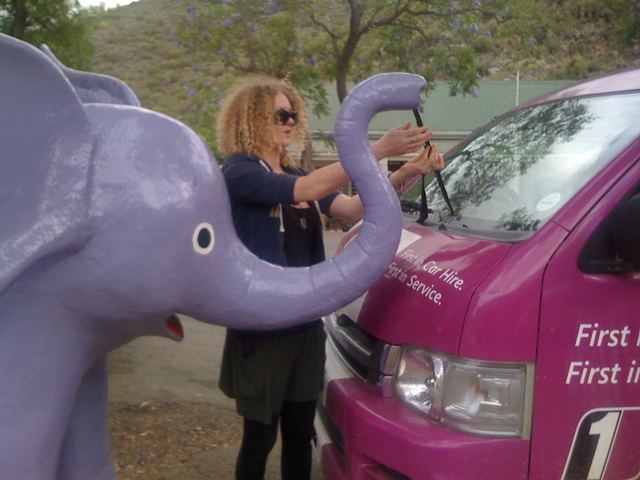 And only recently, I was forced to endure the humiliation of being wed to a purple elephant in a pagan roadside ceremony by that lunatic “motorist” amidst moronic giggling. Now I have, amongst my manifold duties, a family to support. Thus, I am forced to conclude that my dreams of, dare I say it, love, are dreams of folly.

My tormentors underestimate me, drastically. They do not know that I cultivate ambition (and, dare I say, more culture than the four of them combined), and that I have the capacity to scheme. But I will leave you there. The walls, as they say, have ears.

Think of me in these next few days. My release is near, and soon, I will majestically coast the utopian tar roads I was born into.

Do not forget me.

This entry was posted by on 29/12/2010 at 11:33, and is filed under Uncategorized. Follow any responses to this post through RSS 2.0. Both comments and pings are currently closed.