« Day 5
We Accidentally Went to Lesotho »

Three Unicyclists and a Blogger: Informal Interviews in Masakala 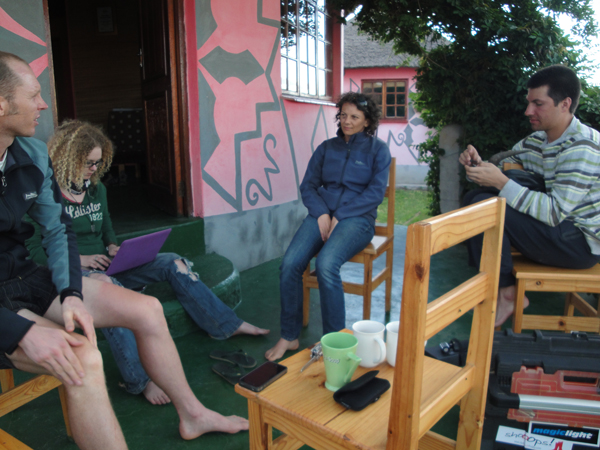 Johnny's just fastened a horn he found on a cycle route to his helmet, and is prancing around the hut at Masakala Guesthouse with it. It makes him look like a swept-back unicorn.

Donna is massaging Alan's back while he flicks through pictures on his iPhone, and we're all sitting on the cozy little veranda of the Masakali Guesthouse, with its pillars draped in grape vines and villagers shooing cows and horses home.

I regret that so far, pretty much all I've talked about is from the perspective of the Purple PeopleWagon.
I need to get more into the heads of unicyclists – of what they're experiencing. How they'r finding the terrain. How they're managing to keep it… balanced. I sneak out my Macbook and surreptitiously start typing while I ask innocent, unobtrusive questions. They'll never figure out I've set up a sneaky interview.

So, what's the first thing that comes to your mind after this day?

JOHNNY: Wind. Side-wind.
ALAN: Snake-wind?
JOHNNY:  We met a man who told us there's a giant snake who lives in the Drakensburg who controls the wind, and that he's angry! Today was a day with terrain that wasn't that challenging, but what made it this tough was this wind which wouldn't let up, which constantly comes from the side; you have to twist your whole body to counter-act the wind, when you're already twisting your body to counter-act everything else, and you twist muscles that, you know, you shouldn't be twisting!

So, muscle-wise, what's hurting the worst?

JOHNNY: (slaps himself above the knees) This part. The top part
ALAN: It's different – with the wind, it's like my upper body really got a work-out; my back and neck is stiff too. But mostly it's the legs.

The mud today? How do you cycle through that?

JOHNNY: You don't! You walk!
ALAN: THere's no traction, see…
I know about that "no traction" thing…
ALAN: The wheel just spins…
I know all about that too!
JOHNNY: We do get to ride the downhills in mud, you can get by without traction that way. Flat sections and uphills, where you don't have any traction, is the main issue, really. Otherwise, you can't move through mud.

What's been the toughest so far?

JOHNNY: Day 1.
ALAN: No doubt about it.
JOHNNY: Psychologically, physically, everything. Navigation was a big issue.
ALAN: There really was a bit of a panic, in terms of what we were actually in for. It was an unbelievably tough day.
DONNA: The people made it eerie.
JOHNNY: The worst was the humidity.
ALAN: We went through, what, 12 liters of water?
JOHNNY: And we went through 17 hours of riding, we ran into difficulties with people…
ALAN: Our support vehicle couldn't find us…
Shocking.
ALAN: Yeah, so it was just a shock of a day. It was bad.
JOHNNY: It was a very, very humbling experience about what we were in for. But we made it.

So has Day 1 still been the toughest, in terms of terrain?

JOHNNY: The terrain wasn't so bad! The toughest terrain was Minerva. Sorry, Ntsikeni – that was just completely unridable terrain.
ALAN: Minerva was really scary, because we really didn't know where we were, it was misty, we thought we were on the right course but couldn't be sure, and then we kind of just eventually popped up at the right place.
ALAN: It was the slowest we've done in the shortest distance. It went from nothing, to cattle track, to road, then we hit a Jeep track, so it improved eventually, but the marsh was impossible.
JOHNNY: You ask about the toughest terrain, but there's lots of things that factor into an experience which makes a ride tough or easy.
DONNA: It depends on if it's wet or dry, or light, or dark… a lot of things make navigation difficult. Weather plays a big part.
JOHNNY: Definitely, yeah.
DONNA: Maybe we should start summarizing weather conditions on the blog…
ALAN: Wind factor, sun factor, cloud factor…
DONNA: Silly-why-are-we-doing-this factor…

What's been your favorite route so far? Have you, um, have you been having fun?

ALAN: Good question!
JOHNNY: Well, ja! I mean, even Day 1 was fun, despite the circumstances, it's an adventure!
DONNA: Yeah, it's like a rewarding pleasure.
JOHNNY: Look, there were times when I wasn't smiling.
DONNA: Yeah, we found after you'd separated from us, when you were in Ntsikeni, you looked pretty wild.
ALAN: The look on your face was like an animal –
JOHNNY: I was stressed! I really was. I think that was my worst moment.
DONNA: Look how pretty the sky is.
JOHNNY: It's really pretty, Donna.

JOHNNY: Yes. The reason we've been going so slow for these past 7 days, has not been terrain, it's been navigation. David Waddilove told us in the beginning, "You have a map, and you have a narrative. One of them is right." This is incorrect!
ALAN: We've spent a lot of time just stopping, re-routing, trying not to get lost. Sometimes we just don't know where we are.
JOHNNY: Many of the roads are simply not marked. We
ALAN: Also, we're very, very novel on the route. These people have never seen unicycles before. We hear a lot of laughter, a lot of screams, a lot of whistling. It gets a bit irritating afterwards.
JOHNNY: Lots of "Haibos!"
ALAN: And bicycles. Messed-up bicycles. One was held together with loops of wires, and falling apart… they follow us for kilometers.

So does stopping and talking to people take up a lot of time?

JOHNNY: Yeah, it does.
ALAN: Yeah, if we stop to navigate or eat, people go straight for the uni. And Johnny's quick to help them up on the uni, sometimes he forces them!
JOHNNY: One of my favorite events was this group of kids who I tried to cajole into having a try, and none of them wanted to go for it. They were like penguins, none of them wanted to go. And, eventually, out of the crowd, there was this tiny little kid who came out from the crowd, and I helped him up on the unicycle – his feet couldn't even reach the pedals, so I just held him up and pushed him around a bit, and he lit up – he was having a blast! And as soon as this happened, the effect was like a wave – every other kid wanted to have a go! So just seeing them conquer the initial fear – and people are scared of the unicycle! – was great to overcome with them.
DONNA: That's sweet.

That's cool. Tell me about the cows. Who provoked them?

JOHNNY: What cows?
ALAN: I think we stepped into their house.
JOHNNY: Oh, those cows!
ALAN: I think they thought we were feeding them…
JOHNNY: And we came between them and the feeding troughs, and they charged. So that was scary.
ALAN: Yeah, it was scary, because they were being aggressive about it! They were like, pawing their hooves in the dirt, mid-run… so that was threatening.
JOHNNY: Yeah, I've been chased by cows before, Alan was, I think very inappropriately laughing hysterically.
ALAN: Hehe.
JOHNNY: We've had lots of funny experiences.

JOHNNY: Well, rather than funny, I'd say lots of animal experiences.

Tell me about your animal experiences.

ALAN: We've seen lots of snakes.
JOHNNY: We almost drove over a black mamba, and saw two red-lipped herrings.
ALAN: Saw two intimate shongololos…
JOHNNY: I got attacked by a pack of dogs…
DONNA: When was that?
JOHNNY: Three dogs came for me!
DONNA: You must aggravate them or something. Maybe it's your smell.
JOHNNY: We saw buffalo or something in Ntsikeni… but we scared them off.
DONNA: You saw a pig this morning at St Bernard's….
JOHNNY: Yes! And then, there's lots of cows. We've gotten good at getting them out of the way, too… we've perfected a technique of waving our arms and making a racket to get them out of the road.
ALAN: Without them stampeding us.

Closing comments? How do you guys feel?

ALAN: We've I wanted to say before, we've had to do, well, lots of river crossings. Like, the one in the game reserve, we didn't know how deep it was. So Johnny decides to wade through, leaves all of things behind, gets in waist-deep, and comes back, so I hand everything over… and then I found a place to jump across.
DONNA: Alan doesn't have any scratches or anything on him! Johnny's like the pioneer of, like, getting beat up and dirty.
JOHNNY: We've been told that if we can get through the first week, we'll be fine. We've almost got through the first week, we're fine, I think…. and we're really, really happy to be doing this.
ALAN: Something which really gives a good feeling, like a good booster, is hitting a road where you can actually go fast. You know that when you go fast, you cover a bigger distance and buy time… so you feel better when something slows you down later. Like, we made great time on the way to St Bernards's, and then hit this hill… and it's frustrating when it's so close, but so far, and the going is so slow.
JOHNNY: But, it feels good to be doing this for charity. I'm really excited to be doing something which is fun, and looking back at what we've gone through, it feels like we're doing something worthwhile.
DONNA: We're not done yet, though. We've got a long way to go, and we still really need to make people aware of what we're doing! 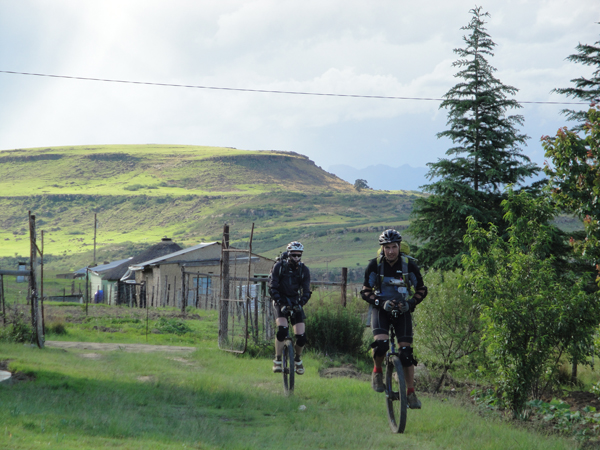 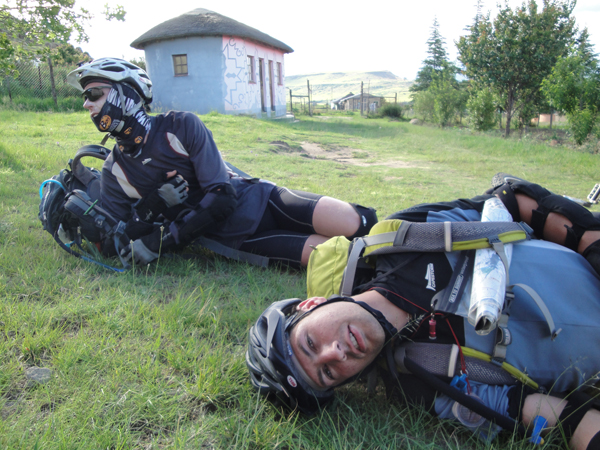 This entry was posted by on 05/12/2010 at 12:34, and is filed under Uncategorized. Follow any responses to this post through RSS 2.0. Both comments and pings are currently closed.