« Three Unicyclists and a Blogger: Informal Interviews in Masakala
Our Week In Pictures! »

We Accidentally Went to Lesotho

We’re in the Eastern Cape, and we’re coasting along the ridges of the Drakensburg mountains. The hills and slopes of the landscape are like some giant lizard’s cracked skin; the hills are green and full of long, winding cracks of deep red floodplains and sinkholes. We see horses and cows everywhere, and flocks of different little birds gather on the roads and scatter like a cloud of butterflies when the PeopleWagon comes trundling through. Weaver-birds, fly-catchers, LBJs (Little Brown Jobs). Ibisis crowd the canopies of trees and leave and arrive together like the popular kids at their favourite table in the cafeteria.

River basins weave in and out of valleys, some gushing rivers, others mere trickling streams.
This is a breathtakingly beautiful, remote part of the world .So remote, that even Google doesn’t know where we are. 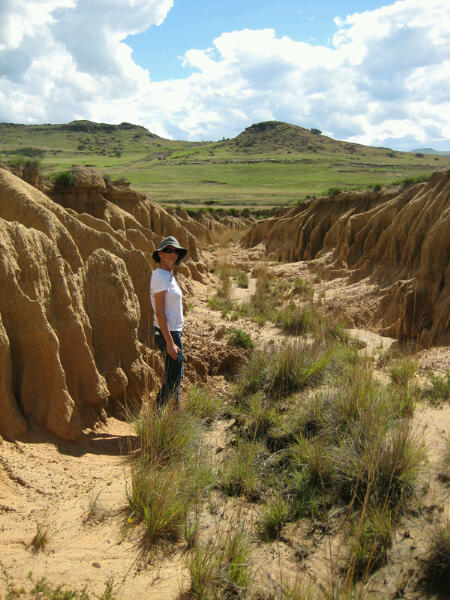 Well, that’s not entirely true. We have maps and landmarks and we know how to get to our nearest "big" towns. Like, yesterday we drove through Matatiele, and man, was that place almost too much for us. We got everything we’ve been sort of on the lookout for, for the past week: special watch batteries, certain brands of ointment, Velcro. Velcro! That place also boasts both a Spark and a Shoprite, as well as two – count ‘em, two  KFC establishments. So, Matatiele’s been the biggest town we’ve passed through since Ixopo, which was the nearest "big town" while we were stationed at Centocow. After surviving the misty wetlands that is Ntsikeni, and the charming, mountain-hidden 70’s blast from the past that was St Bernard’s Peak, we eventually ascended to Masakala guesthouse, which was about 3km away from Matatiele.

Now, we don’t mean to look any gift horses in the mouth. Everywhere we’ve stayed at, has been incredibly hospitable and warm and friendly, and we’ve been fed well at every stop.

But our hostess at Masakala? Almost found herself kidnapped and forced to accompany us in the PeopleWagon, so delicious was our food. We were served a very traditional meal – pap, spinach, potatoes, rice, carrots in gravy, peas. All vegetarian. But man, was it all-encompassing. We raved about the flavour, the spices, the herbs, the home-made "steam bread" – bread cooked in a pot, inside a pot – and left our hostess merely gaping, wide-eyed. "I’m speechless," she said.

Masakala guesthouse is a thatched-roof rondawel in Masakala village, built and styled according to traditional local architecture and design. It’s traditionally simple, with no electricity, but very homely and comfortable. Johnny and Alan arrived at four in the afternoon, tired, but in high spirits.

In any case, I think Masakala put us all a little more at ease. It’d been just under a week of riding, and Johnny and Alan have started feeling the strain.

We’ve started doing drastic things: we broke into our jar of Nutella.

We’d been saving that.

Yesterday we spend a delightful day at Malekholonyane Guest House, which is pretty much three thatched-roof chalets and a kitchen, on top of a valley. It looks right into the Drakensburg and has grassy hills spilling out from under it, which fold into and out of valleys and beds of rock. Here, we met another traveler passing through the night, a loner in tent, with a haunted look on his face. He was quiet for the most part, but when politely questioned, revealed that he was hoping to find a remote spot where he could farm, because after teaching English in Korea for six years, he’d found that car alarms drove him crazy, and that he was incapable of living in cities anymore.

We’re not sure if he was enjoying a dry joke or not, but it put our questions to a stop. 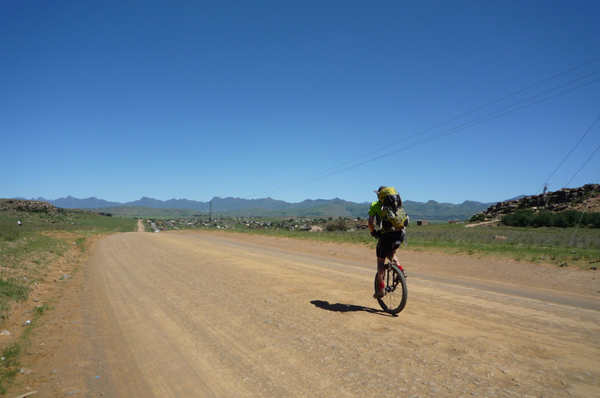 We almost missed Malekholonyane, by driving up and into the Ongeluksnek Reserve, after a very confusing discussion with a very confused security guard, who we later figured out was actually just echoing everything we said. We’d learn later that the Ongeluksnek Reserve gate was a barrier between the Eastern Cape and Lesotho – which meant that we were on Lesotho soil for about five, mis-communicative minutes. Without knowing.

Today is Day 9. On our itinerary it simply says "Tinana Mission". Tinana Mission, as it turns out, is also a church – an abandoned, run-down collection of crumbly buildings and smashed windows, with the main church itself still intact, and used for services. The green pastures are grazing fields for various different flocks of sheep and herds of cows. Donna and I have been kicking it back here for most of the afternoon, because we don’t want to over-stay our welcome at our host house. See, we’re staying at the nearest house to the Tinana Mission, a modest little place belonging to one Mrs. Kibi. We found out the hard way that Mrs. Kibi lives there with her mother, also Mrs. Kibi, who does not speak any English at all. She helplessly gesticulated and smiled and rambled on at us – and all we could do is smile politely, and look sorry, and shake our heads. 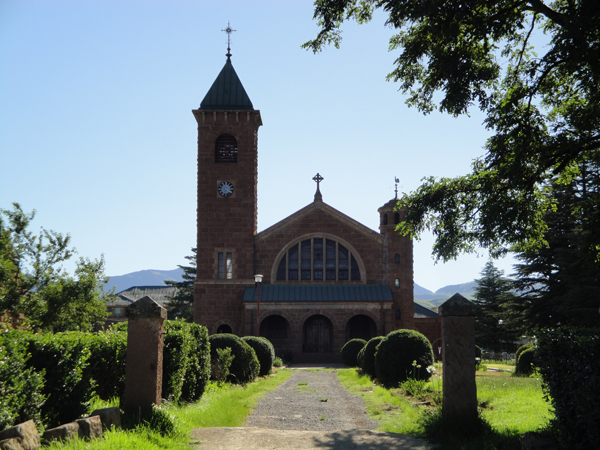 Have you ever showed up somewhere, say, to an interview, and found that nobody knows why you’re there or who you’re supposed to see? That was us. We felt like we’d just walked into a random house and politely asked to be shown our rooms for the evening, thanks. We’d showed up at the house, somebody had opened the gates for us, and we’d driven inside – were we honestly just at some innocent people’s house? Mrs. Kibi Snr finally enlisted the help of her neighbour to translate for us and reveal that, yes, we were in the right place, and that our hostess in the know, Mrs. Thabile Kibi, a schoolteacher, would meet us later that day.

In the meantime, Mrs. Kibi Snr became very busy moving furniture around in her house – headboards suddenly started migrating from room to room, entire mattresses were shuffled across the house – and we felt terrible for imposing. So, we eventually translated that we were going to leave and come back at 5 o’clock. We think we’d somehow accidentally implied that we wished to go to sleep immediately, hence the hurried action. 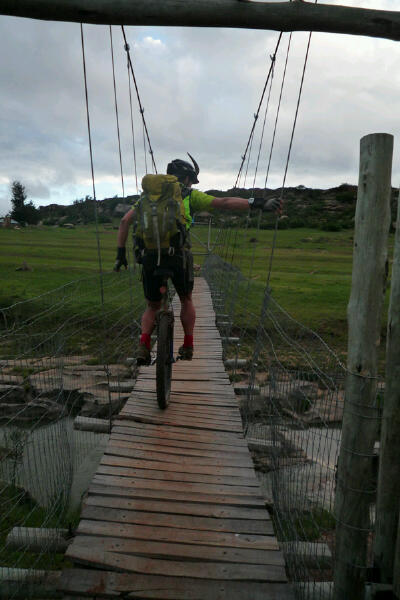 Today is Monday, Day 10, and we actually woke up to roosters crowing as the sun rose. We’ve spent what has actually turned out to be a very sweet evening with Mrs. Kibi’s family – Donna and I played cards with her daughter, Lona, and when she mastered Rummy, she beat us both. Without us even trying to be nice. We had an excellent dinner, and more home-made steam bread, which we’ve vowed to try and make when we get back. According to local knowledge (Mrs. Kibi), all you need is a kilogram of brown flour, half a packet of yeast, a teaspoon of salt, some sugar if you want, and then mix a dough until it begins to rise. Then, stick it in a pot, inside a pot of water, and steam for two hours. It sounds simple to us, but we’re suspicious there’s something we’re not being told. This is really, really awesome bread. Somebody try it out and report success/failure? That way we’ll know we need to dig deeper for the secret.

Johnny and Alan had a tough riding day yesterday, and a little navigation error cost them an extra two hours of cycling yesterday. According to the two of them, they actually ended up hiking up more parts of the route than cycling – steep climbs and valleys. 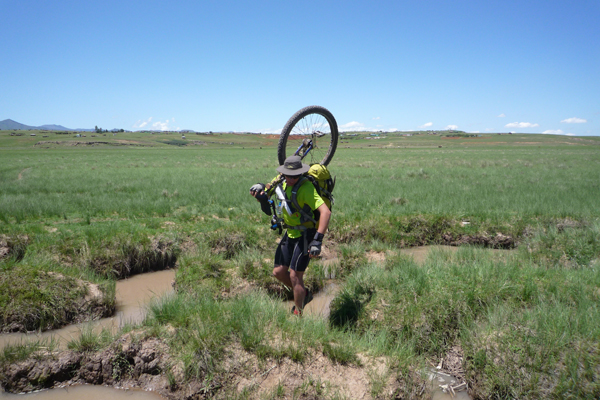 I’m sorry to report that Alan’s not in good health today. He hurt his ankle but has kept going with a stretchy bandage, and he’s ill enough to sit out today’s leg of the race. 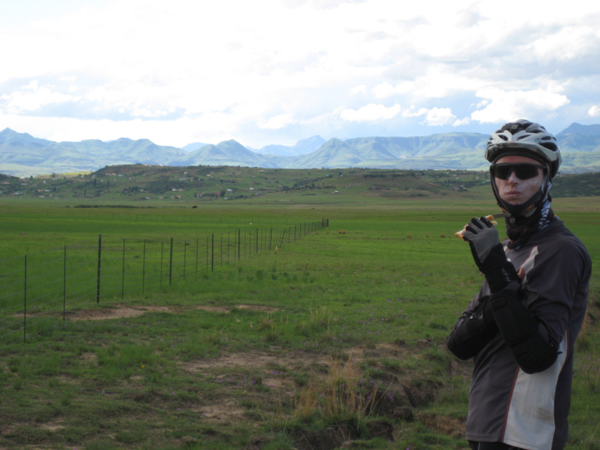 We have a rest day after Day 11, which we’ll be spending in Rhodes, a village which actually shows up on our roadmaps, so we think it’s a slightly bigger deal than Mount Fletcher, our current "big town". It’s something we’re all looking forward to – it’s been a tremendous ten days so far, for everyone, physically and psychologically.

But, we’re getting there. And we appreciate the support you’ve given us, by reading this, checking in with us, commenting, following us on Twitter. We’re not out of the woods yet, though – we really need donations to meet our goal of 2000 shoes for Bob’s For Good! Please tell your friends, your friend’s friends, anyone – these guys are doing a crazy, tremendously challenging thing for charity. They’re nuts, but we want this to pay off.
Thank you!

P.S: You guys know about our new live tracker on the right, right? In case you missed how to access it, use these details:

Now, stalk Team CounterBalance from the comfort of your home!

This entry was posted by on 06/12/2010 at 11:34, and is filed under Uncategorized. Follow any responses to this post through RSS 2.0. Both comments and pings are currently closed.