« Some Pictures For the Weekend
What Happened to Neil Cronje »

So, whoever said the Karoo was flat, lied. 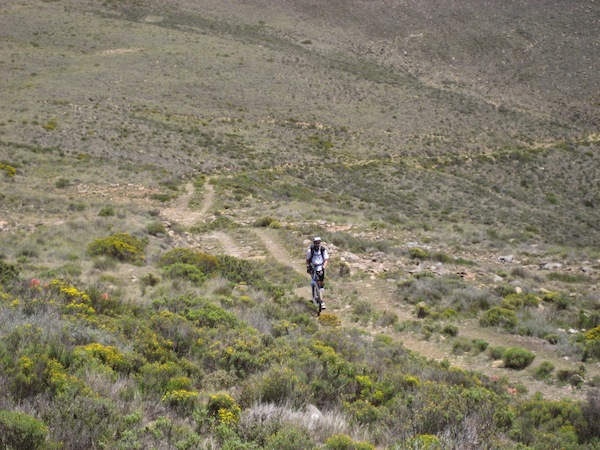 Well, it’s flatter than the Drakensburg. A lot, actually. And we’ve definitely had fewer problems with rain and getting stuck in mud. The PeopleWagon really appreciates that. 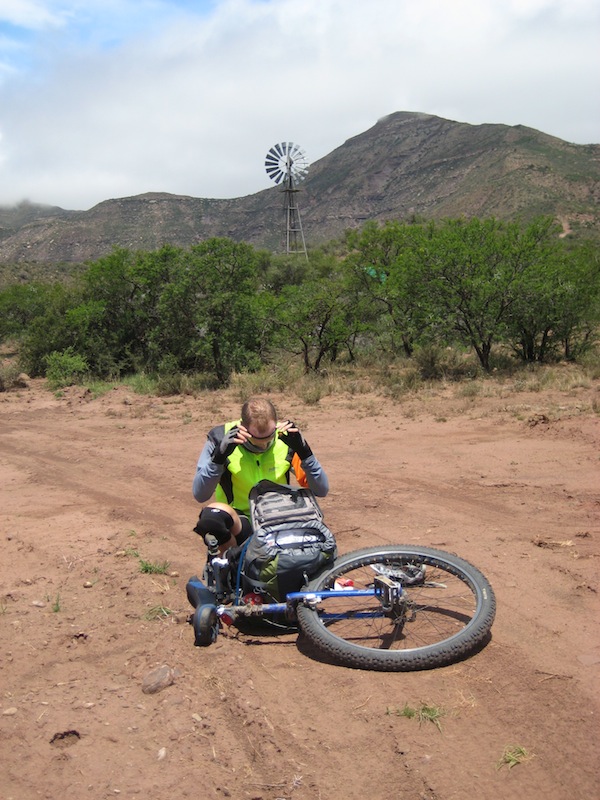 Although there are a lot of acacias around. And those plants have like the most unfair natural advantage ever. Apart from having ridiculously huge, white thorns everywhere, these plants actually communicate with each other chemically and become poisonous when they sense an attack (i.e something chewing on the tree). Ever notice how giraffes never seem to just eat the whole tree of whatever kind of leaf they’re nibbling on? Acacias talk to each other. So, there is absolutely no winning against these things, ever. Johnny and Alan (mostly Johnny) got like million punctures a few days ago, and ran out of tire slime to fix it until a quad-biking farmer came to their rescue. From acacia thorns. So, just a heads-up, Human Race. A new contestant has slowly and quietly entered the ring. 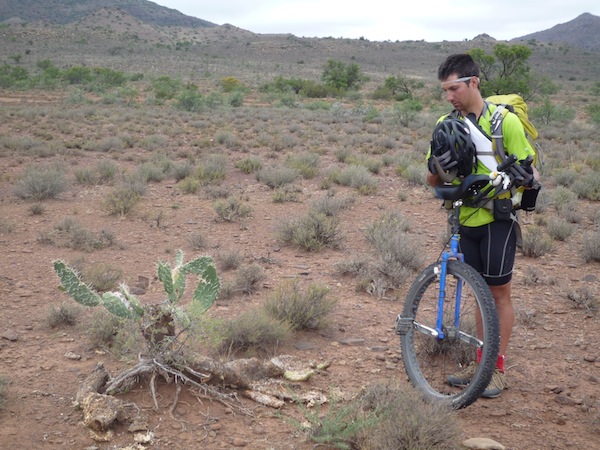 So, we’ve been quiet and and low-reception areas lately, we’re sorry. 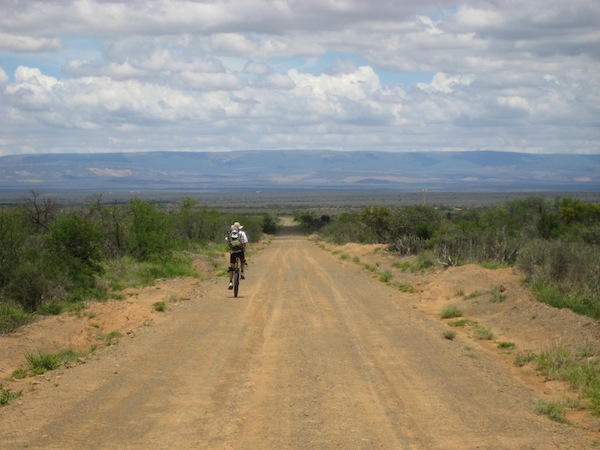 We’ve spent the last week in the proper Karoo. Shongololos and cacti everywhere. We last left you in the sleepy and possibly spooky little town of Hofmeyr, and since then we’ve been traveling sprawling red roads from farm to farm. Hofmeyr has one big tourist attraction that seems to draw a lot of pit-stopping tourists: the Karoobos restaurant. At the word of Johnny, Alan and Donna, their venison pies are very good, but I can certainly vouch for their strong, dark coffee, which they serve to you in a little two-cup plunger all to yourself. This formed a significant part of my food pyramid for our stay. There isn’t all that much to do in Hofmeyr, but we didn’t really need to – we were happy to spend our Day Off being lazy and eating Nutella. 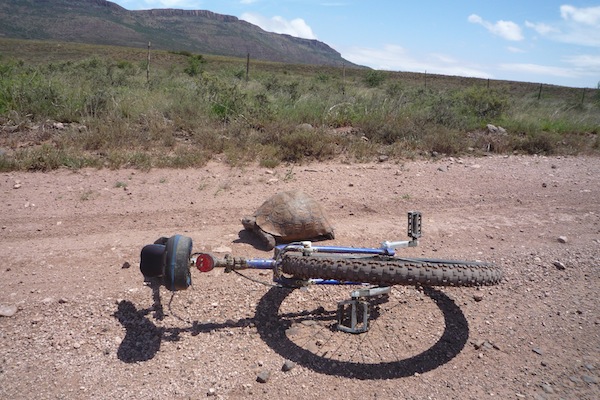 For some reason, we always sort of expect the venues of our rest days to be massive cities full of everything we need, and the most we end up with is a convenience store with two types of biscuit, bars of soap, and lots of tinned food. Hofmeyr was a place which turned out to be just a little bit smaller than a town we’d all stopped in and somehow received free things from: Molteno. Do not be put off by the apparent barren surrounds, the dirt roads, the cacti or tumbleweeds. This is a ruse for what is otherwise a community of criminally friendly and helpful people. See, in the morning, Alan went to see a doctor about a painful shoulder (not that you need that for riding a unicycle, as far as I know, but I’m not the expert here), and ended up getting a consultation and some medicine – for free. Meanwhile, next door, Johnny had accumulated free coffee and rusks from Molteno Guesthouse, (initially planning to buy some coffee for him and Alan, he insists), while at roughly the same time, Donna and I were on the other side of the town, eating second breakfast and finding that the owner kept “forgetting” to bill us for the toasted sandwiches we’d had, as he exaggeratedly indicated with a theatrical wink and a knowing tap to the side of his nose. Why did we get so much free stuff in Molteno? Why was everyone so nice? Whatever the reason, we sorely misjudged the place on face value, and we learned our lesson and left with warm thoughts for the place. 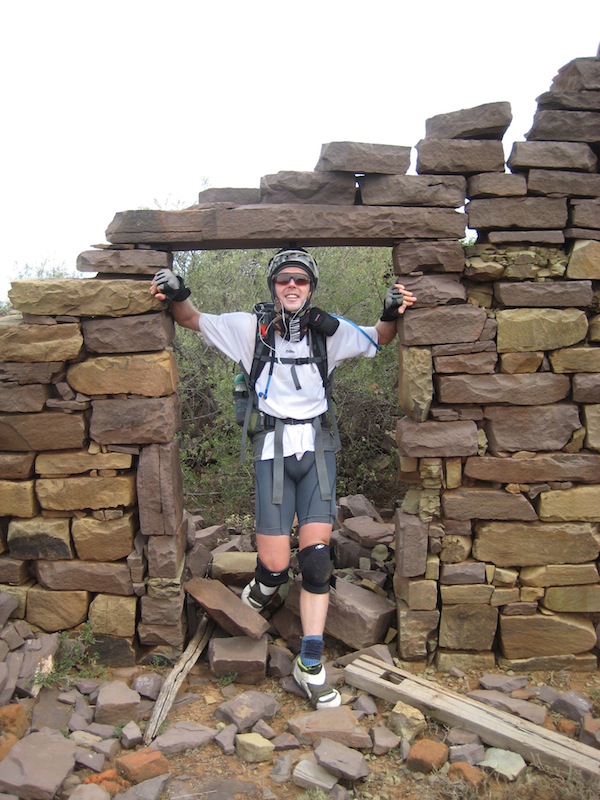 We didn’t get as much free stuff in Hofmeyr, but they did sell two types of biscuit.

Our first farm after Hofmeyr, Stuttgardt, was made memorable for two reasons – firstly, Donna and I over-shot the farm by about 50 km, because their farm sign was so faded that we both comfortably ignored it as we drove past it the first two and half times; secondly, because our host family was (as almost everyone we’ve stayed with) extremely congenial and massively entertaining. Francois, particularly, had us in stitches as he gamely and graphically explained the rites of passage involved in shooting a buck for the first time. From his accounts, it involves swallowing an unsavory part of an exclusively male part of the animal’s anatomy in front of all of your friends. We don’t always understand their ways around here, but boy, are they an entertaining bunch.

Doornbos and Vandeventerskraal both turned out to be little self-catering mini-houses hidden in the depths of many winding weirs over dry river mouths and salt pans. Johnny and Alan are in good shape and are making good time almost every day, and even sometimes stop to goof around with pieces of dead animals. Looking at some of the pictures they’ve taken, I’m continuously amazed at the terrain they so casually cycle through; I still trip and wobble off perfectly flat terrain when I try and make my little unicycle do things. 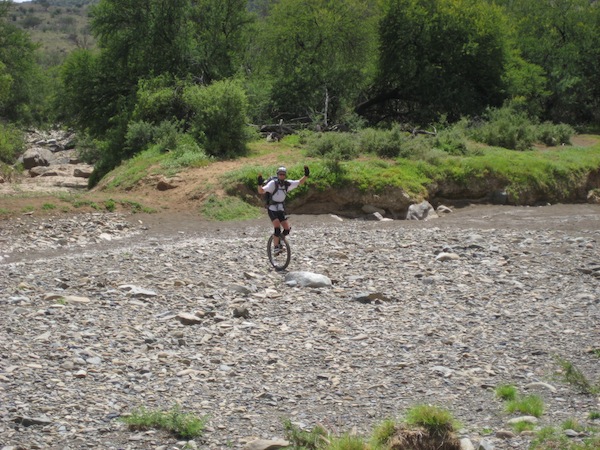 Doornbos was a little house surrounded by, well, thorns. Everywhere. As if the name wasn’t a warning – we all found this out the hard, pointy, way. We were a little disappointed at staying in Doornbos the next day, not because we were at all ill-treated, but because we’d been served brunch at the wonderful Onverwacht Lodge, only some twenty kilometers away. First of all, this place runs off green energy, entirely – up to excess, apparently. Their front porch roof is built entirely out of solar panels, and the whole lodge (and their house) is powered by solar energy. The German owners, Mr. and Mrs. Jacob, say that they have an emergency generator, but have never had to use it. The whole place is clean energy! They are furthermore simply an amazing, beautiful couple, with a dry, dry sense of humour. When Johnny asked Mrs. Jacob what kind of meat made up their delicious breakfast potjie, she jerked her thumb at the brown Damara lamb on the porch, and bleated, “Baaaaah” – while “Ollie” glared balefully at us as he pressed his nose against the glass window and misted up the glass. Ollie thinks Mrs. Jacob is his mother and humorously follows her absolutely everywhere, but is not allowed inside. Sheep can’t control when or where they poo, it seems.

We were extremely reluctant to leave, so much did we enjoy the company of our genial breakfast hosts at Onverwacht – they were tremendously entertaining, worldly people.

Now, Vandeventerskraal turned out to be a massive, empty house with very helpful and informative notes taped everywhere – where to find the key, how to heat the food that had been left for us; it was like a video-game! Except set in a creaky, wooden house with long corridors, and old furniture and stuffed animal heads everywhere. In the middle of nowhere. On an overcast day. With mysterious knocks and groans and angry bees buzzing from places we couldn’t find. I passed the time by shakily wobbling through the house on my pink training unicycle, so I was like that kid from the Shining, except I saw far fewer creepy ghost-twins or blood running from taps. Johnny and Alan arrived and stepped into the house literally the moment it actually started to rain, and we were treated to a spectacular electrical storm – being residents of Cape Town, these are rare for us, and we get excited about them. The home-owners did eventually make an appearance later that evening, having heard that there were a bunch of crazy people doing the Freedom Challenge on only one wheel; so of course Johnny and Alan had to demonstrate, pose for pictures, help the kids up on the unicycles, and somberly stand aside and be called insane. 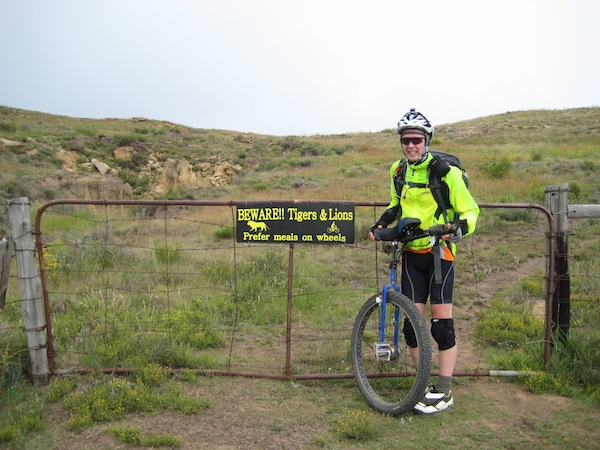 Getting to Toekomst turned out to be a breezy ride for Alan and Johnny, who are getting so good at this that they can do it with their hands behind their heads, but I had some trials to face. It wasn’t mud, slippery slopes even tall grass; it was purely not knowing where the heck I was. See, I think I’ve mentioned before that the Freedom Challenge maps and narratives we have, are for the off-road trails that the cyclists are meant to follow. Sometimes national roads appear on them, sometimes they don’t. I’d say a good 70% of my navigation preparation involves driving to the nearest friendly-looking bastion of civilization and asking for directions to fix the mistake made from the previous directions delivered. On this day, the only clue I that I was doing the right thing was that I was generally driving south – there were no land-marks or signs or any indication that I was driving towards anything meaningful. Just red Karoo dirt road, succulents, and acacias. I finally stopped at a farm house where a slightly embarrassed woman in a pink face-mask and mis-matched furry slippers pointed me in the wrong direction, where I stopped at another farmhouse where a guy lying shirtless under a blanket on a couch with a puppy on his chest sleepily pointed me in the opposite, correct direction. 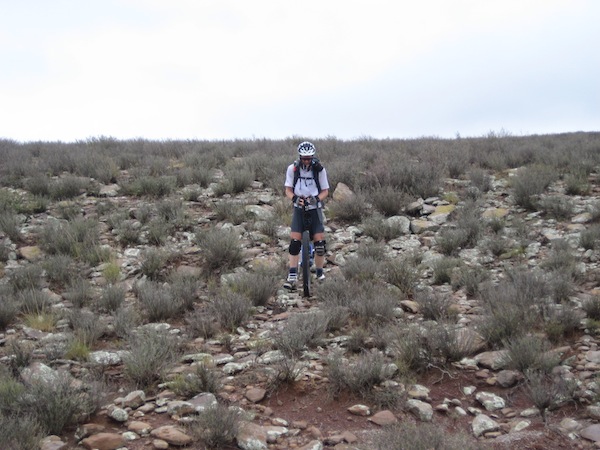 I found Toekomst, eventually, and was not as initially delighted as Johnny and Alan were when they arrived, but I guess I warmed to the place – it was a massive house. With a courtyard. And a tennis court. And a pool. And a private miniature cinema. And the owners were on holiday, abroad.

Today, we’re headed for Kleinpoort. I’m suddenly seeing signs pointing towards places I recognize, like Port Elizabeth, so we’re slowly starting to recognize ourselves on the map, and Google’s giving us answers again. We watched the weather yesterday, after we re-taught ourselves how television sets work, and saw that it looks like it’s pretty much raining everywhere we’ve been to and are planning to go to in the next week, which I suppose is indicative to the truth the Rain Dance is best performed on one wheel? We’re not trying to take credit for anything, we’re just observing some coincidences. 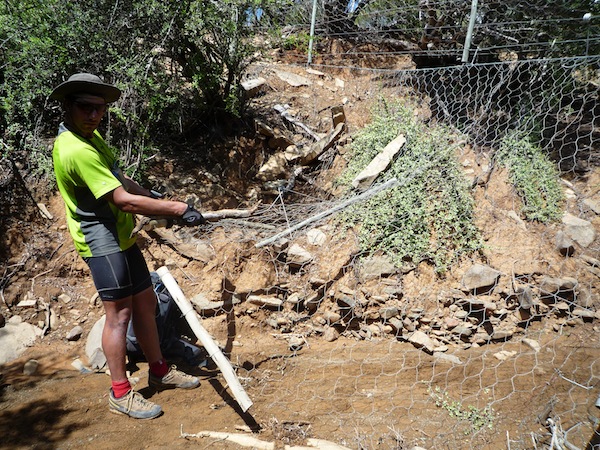 Wow, can you guys believe it’s Christmas this Saturday? We’ve got our Santa hats and tinsel ready, and get this: we’re spending the yuletide in a cave. How wicked is that? Makkedaat Caves, to be exact – so we’re excited about that. We’ll still be getting up early and cycling (well, I’ll be driving) on the day, and before that, and afterwards, but we’re okay with it! We’re doing it for a cause, and what we’re hoping to raise out this tour is best Christmas gift we can muster up. 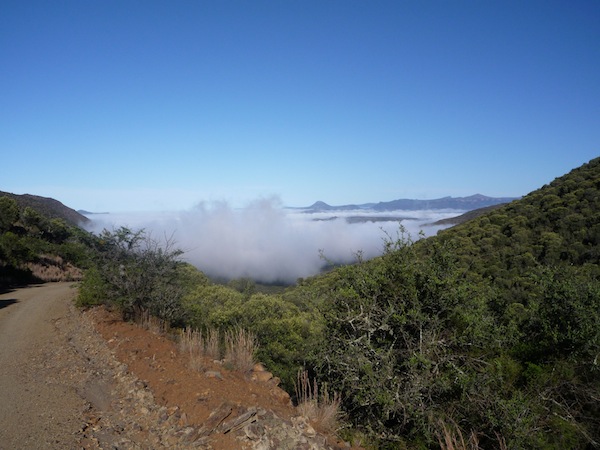 We want to raise enough money for 2,000 pairs of shoes for Bob’s For Good Foundation, and we hope that by doing something crazy for good, we can get other people to do something similar.

To everyone who follows our blog and Twitter, everyone who’s donated or helped out or supported or just helped spread the word, thank you so much for your support. It means the world to us.

But we’re not out of the woods yet. We’ve passed the half-way mark; today is Day 24, so we have 20 days to go. We’ll be climbing through the Western Cape soon, and that’s going to heat things up – seriously, it’s like the whole of South Africa’s being rained on, except for Cape Town. That’s murder to ride

through! I have a big, purple air-conditioned pirate ship. They have a massive back-pack with water they have to carry. Four wheels, easy; one wheel, hard.

Johnny’s father, Neil, is doing better, and has been transferred out of ICU – thanks to everyone for the well-wishes. CounterBalance continues to send warm regards to the Cronje family. 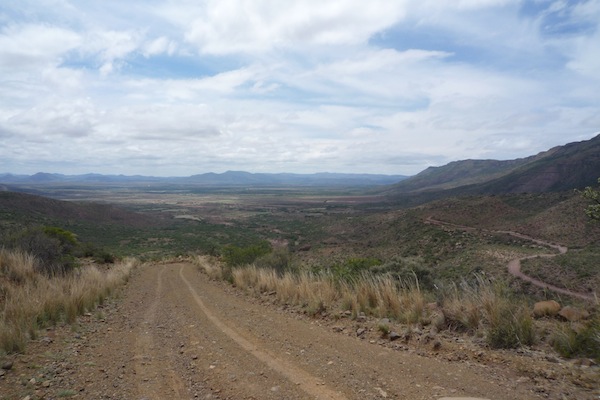 This entry was posted by on 21/12/2010 at 11:25, and is filed under Uncategorized. Follow any responses to this post through RSS 2.0. Both comments and pings are currently closed.