« We are Karoo-ral!
Like David said: “Not only is it a journey across the country, but a journey into the soul” »

What Happened to Neil Cronje 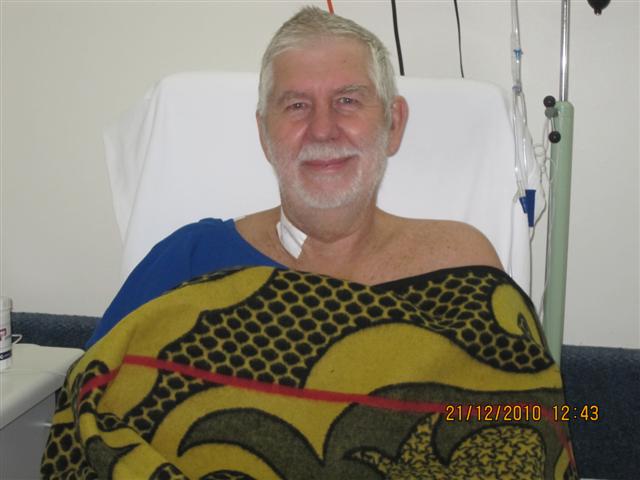 Thank you to everyone who has been sending thoughts and regards to Neil, me and the Cronje family. The support has kept us going. I guess that it is time to give some more details about what happened, now that things are finally looking up. I’ll try to summarize a very difficult 2 weeks.

Neil was knocked over by a large truck (the 16 wheeler kind of truck) whilst on his motorbike, coming home from work, on Frans Conradie Drive (Northern Suburbs) around lunchtime on December 7 . He is uncertain as to what actually happened, and there were no witnesses. It seems that the truck knocked him over to the side, pushed the bike onto his leg, and the truck then drove over the bike. The truck did not stop. Thankfully, a doctor noticed the bike and then my dad on the side of the road and stopped to help. He was in a critical condition. There was extensive damage to his left leg, with multiple injuries elsewhere: broken leg bones, shoulder blade and pelvis. For the medics out there, his hemoglobin was 4 when he went to casualty at N1 City hospital – that is critical. He was in severe shock from blood loss, his leg was bleeding, and more injuries were being discovered.

Initially it was thought that his leg would need to be amputated. The surgeons have so far managed to save the leg, but will need to reassess in 5 weeks time. Most of the muscle in the calf was lost. By some wonder, there was no head, brain, neck or spinal injury. The next few days in ICU were very serious. Several surgeries took place to stabilize and clean up various wounds and injuries. It was thought at one point that it would be best to anaesthetize him and mechanically ventilate him as he was struggling with pain control. The doctors also had concerns with his heart and lung functions. Thankfully, this action was not necessary.

For 10-odd days, this was the news that I was receiving. The support from within the family for each other, and from friends has been incredible. Neil had a bumpy few days, with the general trend being that of a slow improvement. He was recently transferred from the ICU to the ward. It is thought that he will spend around 6 weeks in hospital before being able to go home. However, there is really no knowing exactly how long it will take. What is known is that he has a long recovery ahead. His leg is severely damaged and might still need to be amputated, although this is looking less likely as days go by. His appetite is slowly returning, but fluctuates on a daily basis. Flashbacks to the accident have been a problem, but are now settling down. He is constantly tired, but working incredibly hard at his recovery. He has had a lot of visitors which have lifted his spirits in spite of making him tired with the effort from conversing. The past few days in the ward have been really positive. Physio has started, dressings have been changed, skin grafts inspected. Strength is returning, and his sense of humor is back. He is causing trouble for the nursing staff, which is a great sign! Things are on the mend.

When I was first told about the accident in Rhodes, details were sketchy. The story continually evolved. “Facts” changed as more was learnt. He was fine, then ill. Stable, then critical. I was ready to go home on the next bus, train or plane. However, my dad convinced me to stay. He told me that he wanted me to continue riding. This was a constant message from him, through all the ups and downs, in spite of how sick he was. The family also discussed it at length, and we all spoke about the possible outcomes of the accident. The difficulty was in knowing how serious things really were – the story kept changing as new details emerged. Throughout it, I was told by my dad to ride. It was very difficult. I still don’t know if I did the right thing by staying, even though things have turned out okay.

I was inspired to ride the Freedom Revolution Unicycle Tour by children who do not have shoes. In spite of all the things that could be stopping them from receiving an education, they persevered in getting to their schools. My Father, Neil, is now a stronger inspiration. The bravery, courage, dedication and strength of mind that he requires to sit in a chair for 1 hour per day, through physical exertion and pain of the mind and body, is humbling when I consider the trials of this Tour. My journey of 44 days to Cape Town is childish compared to his journey of months to learn to walk again. If I stop, I hitch a lift back to Cape Town. If he stops, he stays exactly where he is. He can choose to give up as many people would. But he hasn’t, and I know that he won’t.

I hope that this synopsis gives those who have followed the trip some insight into the accident, and some insight into what’s been going on in my head. This tour was always going to be challenging journey, in ways that I knew I would not be able to anticipate. This accident was one of them.

This entry was posted by on 22/12/2010 at 06:57, and is filed under Uncategorized. Follow any responses to this post through RSS 2.0. Both comments and pings are currently closed.